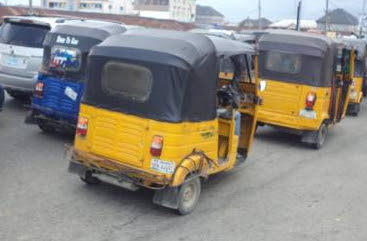 A tricycle operator who reportedly pushed a female passenger to her death after snatching her bag in Warri Delta state has been arrested.

The suspect reportedly picked up his passenger from Airport Road by Mosheshe Estate and was heading to Our Lady’s High School.

The victim identified as Miss Ejiro Ashedo was pushed off the moving tricycle after the driver snatched her bag. In the process, she broke her skull and died on the spot.

However, another tricycle rider who saw what happened stopped the suspect, raised an alarm which attracted passers-by who arrested him.

He was beaten to stupor and dragged to a police station in the area.

The Best Sleeping Position During Pregnancy Is Left, Scientists Warn Against Sleeping On The Back
Photos News: Nollywood Couple Belinda Effah & Daniel K Daniel Go On Movie Date In London