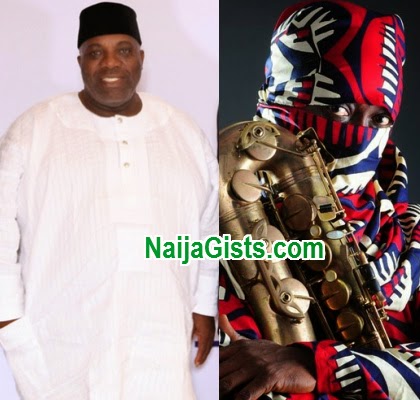 March 11, 2015 – Lagbaja Says Jonathan Is A Failure, Blasts Doyin Okupe For Saying Nigeria Can’t Buy New Trains Because We Are Not America

Masked singer Bisade Ologunde popularly called Lagbaja has come after President Jonathan and his Special Assistant, Doyin Okupe for saying that the Presidency can’t approve acquisition of new trains for Nigeria because Nigeria’s economy is weak. In the insensitive statement, Okupe concluded by saying Nigeria can’t buy new trains because we are not America.

Did you hear the latest from the clown Doyin Okupe?

Did he really insist that our economy cannot support new trains?
At last …it should be clear to doubting Thomases
That this government has been lying about its achievements
Now, finally, they have unwittingly admitted that their great railway
Is a fraud based on outdated and archaic equipmentHis declaration is also clear proof that this government
Has no business remaining in power
They are incurably deceitful… and
They have no idea how to make great things happen
Soon they will lecture us about how Nigeria is too backward
For steady electric power

Should we continue to be retrogressed by their lack of vision?

Continue Reading
You may also like...
Related Topics:jonathan, Lagbaja, okupe