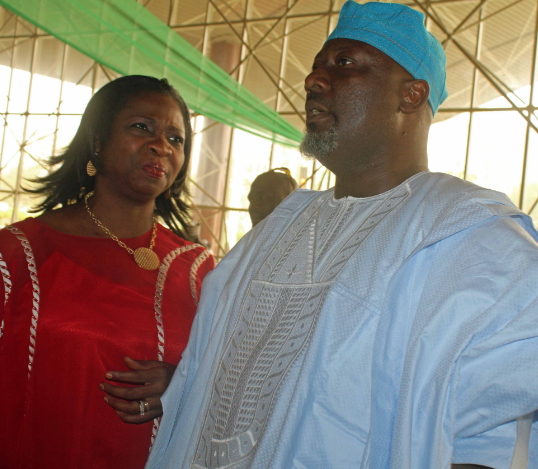 The Lagos Chapter of the APC party has called on Dino Melaye to go for mental check up for threatening to beat up female Senator Remi Tinubu.

Melaye yesterday threatened to impregnate Tinubu’s wife on the floor of the Senate, a statement that had elicited wide condemnation but which Melaye denied.

Here is a statement issued by the Lagos Chapter of the APC party through its Publicity Secretary Joe Igbokwe;

“We take it that this is a slip of tongue but if it is indeed true that this statement came from the heart of Dino Melaye, we need a psychiatric doctor to examine the state of his mind.”
“His actions and deeds in recent times have contributed in no uncertain terms to various setbacks we have witnessed in the 8th Senate since its inception on June 9, 2015. The hallowed chamber of the Senate of the federal republic of Nigeria is a prestigious place for the serious-minded, cerebral men and women, men and women of honour and integrity, those who can hold their heads when others are losing theirs, experienced but humble men and women.

“It is not for lunatics, rascals, street urchins, ethically challenged bigots or integrity challenged charlatans. It seems to us in Lagos APC that Senator Dino Melaye has reached a point of diminishing returns,’.

“The unstable and funny man from Kogi State has reached a point where there is no other place to go but to go down irretrievably. He can only go down with his likes and not with our own Senator Oluremi Tinubu, the highly revered, honoured and distinguished wife of our National leader, His Excellency, Asiwaju Bola Ahmed Tinubu.

“Lagos APC wants Dino Melaye to move quickly to apologize to Senator Oluremi Tinubu and her beloved husband, Asiwaju Bola Ahmed Tinubu, and have the statement credited to him withdrawn without any further delay.”