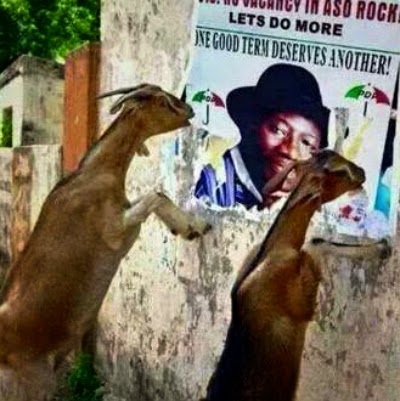 The Lagos State Government has ordered the Transformation Ambassador of Nigeria (TAN) and its affiliates to immediately remove all President Goodluck Jonathan campaign materials illegally deployed on street lamp poles in Lagos.

The government said if TAN failed to heed the order, its enforcement team would remove the posters in line with the enabling law setting up the Lagos State and Advertising Agency, LASAA.
At a news conference in Ikeja, Lagos, Southwest Nigeria on Wednesday, Managing Director, LASAA, George

Noah, said the agency was constrained by recent developments in the electioneering campaign in Lagos to bring to the fore impunity and illegality that posed immeasurable and long term damage to those who erect, operate and maintain billboards in the state.

Noah said the agency had been informed that in the last 48 hours, two advertisers in the outdoor sector had terminated multi-million naira contracts with outdoor agencies registered by LASAA to operate in the state.

He stated that the contracts had been terminated as a result of the parallel and illegal deployment of Jonathan campaign materials on poles paid for by these advertisers.
“The two advertisers in question are Chinese Telecoms firm, Huawei and Globacom and the outdoor agencies affected are Touch Point Limited and Clearedge Limited. Both agencies have lost a whooping N350 million.

“The illegal and brazen act by agents of the PDP is unjust, inconsiderate and therefore unacceptable at a time outdoor advertising is facing stiff competition from television, radio and social media
“The illegal act by the agents of the PDP is capable of destroying outdoor agencies in our State. It will almost certainly leads to lay-off of workers and loss of revenue for our stakeholders,” he stated.
Noah added that in line with the agency’s statutory functions to regulate and control outdoor in Lagos,

“LASAA hereby directs the Transformation Ambassador of Nigeria and its affiliates to remove all campaign materials illegally deployed on street lamp poles in Lagos State immediately, failing which our enforcement team will remove same in line with the enabling law setting up LASAA.”

He also alleged that the PDP agents had been removing the advert materials of Glo on poles which the telecom company paid for, to replace them with Jonathan’s posters.

Noah further alleged that the PDP and TAN had deployed policemen wherever these impunities were taken place to give them cover and safeguard their illegal act, adding that the police authorities had withdrawn the policemen attached to the agency to assist it in enforcing illegality in the outdoor industry.

“What they have done is to withdraw the policemen attached to us. They are using the police to fester an illegal act. They are coming to Lagos to disrupt the outdoor business worth about N50 billion and employs about 100,000 people. They have transferred all sorts of people to Lagos state to do their dirty jobs. It is one illegality gone too far,” he said.