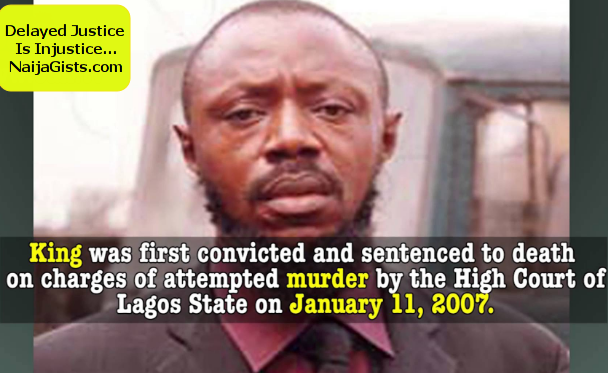 April 18, 2017 – Lagos Still Contemplating On The Execution Of Reverend King 10 Years After He Was Sentenced To Death By Hanging

Lagos Explains Why Rev King Is Yet To Be Hanged…. Execution Delayed After Convict Told Prison Officials He Has Right To Live

The Lagos State Government is still yet to make a decision on the execution of the General Overseer of the Christian Praying Assembly, CPA, Chukwuemeka Ezeugo, a.k.a Rev. King, and others on death row in Lagos prisons.

The nation’s apex court had on 27 February, 2016 upheld the judgement of the Appeal Court which passed death penalty on King, saying the condemned cleric must die by hanging.

State Attorney General and Commissioner for Justice, Adeniji Kazeem at a ministerial press conference on Tuesday in Lagos, Southwest Nigeria said the state government was reviewing the matter and would make a decision very soon.

Kazeem said he visited prisons in the state recently on the instruction of Governor Akinwunmi Ambode and prison officials drew his attention to the highhandedness of those on death row.

He said these condemned prisoners felt that they had certain rights which excluded them from being executed.

He said the prison officials complained bitterly about this and wanted the government to take action to remedy the situation.

“Very soon, you will see the action of this government on that issue. We are reviewing the case of Rev. King and others on death roll,” he said.

“Lots of people are on death row. Rev. King is not the only one on death row, it is on the instruction of Ambode that I visited the prisons recently and I discussed the issue with the prison officials and they expressed concern.

“We are moving in that direction of signing. The prison officials said we need to look at that seriously. Those on death row are beginning to think they have some rights. We are going to move in that direction, you will hear from me, but I will not tell you the exact date,” he said.