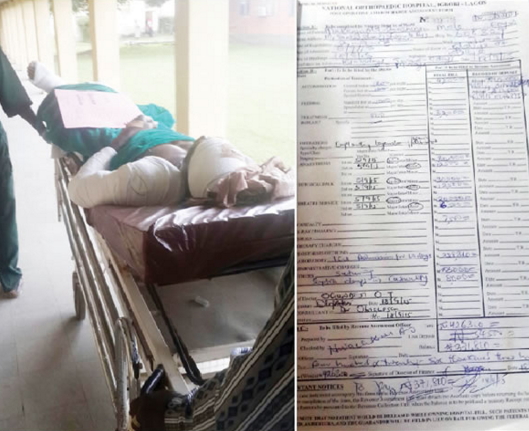 Pictured above is the seized corpse of Bashir Makanjuola, a 61-year-old husband of 4 wives and father of 8 children who was crushed to death by a hit and run driver in Oshodi Lagos on the 1st of September 2015 while crossing the road.

The deceased was rushed to LASUTH in Ikeja but was referred to NOHIL (The National Orthopaedic Hospital, Igbobi, Lagos) where he was admitted.

On the 5th of September, 2015 he was moved to the ICU unit where a surgery was carried out to treat the internal wound he sustained.

When his family could not pay for his treatment, the doctors stopped treating him.

He eventually gave up the ghost at the hospital for lack of treatment.

His family members were shocked to hear that they have to pay N471,810 in order to get his corpse.

Late Makanjuola’s corpse is still being held at a morgue in the hospital.

His family has petitioned the Chief Medical Director of the hospital.