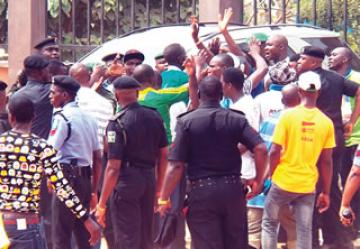 One person was killed and two others injured after hoodlums clashed at the ferry area of Oworonshoki, Lagos, on Thursday.

Trouble started on Wednesday night after thugs alleged to be loyal to the Oloworo of Oworo, Oba Saliu Oloruntoyin, clashed with some suspected cultists.

The fight was caused by some thugs’ refusal to share N10,000 given them by a truck driver carrying granite in the area.

It was gathered that two out of about 20 thugs who were present decided to sideline others and that led to a fight between the thugs.

The areas affected in the fight were Lagos Street, Ewore and the waterside.

In the course of the fight, one of the men was stabbed on the neck with a jack knife and rushed to a hospital where he died.

Angered by the man’s death, his group took up arms and went after the other group in a clash that continued till Thursday morning.

Shops and school were shut as the hoodlums seized the opportunity to loot people’s properties.

They shot sporadically and injured two other persons in the process.