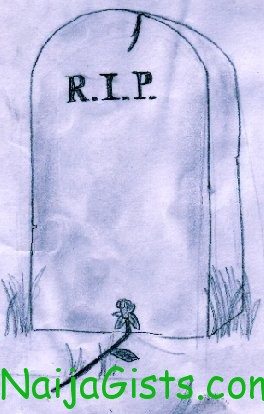 Further investigation revealed that fight erupted when Pastor Ahamefuna engaged his daughter’s lover in a brawl. The suspect who is now on the run, allegedly held tight to the pastor’s penis, squeezed and stretched it.

According to an eyewitness, the pastor screamed, slumped and died on the spot.

Neighbours rushed Ahamefuna to a nearby hospital where doctors confirmed him dead on arrival.

It was learnt that the love affair between the pastor’s daughter and Okechukwu was the cause of the fight.

Sources said the late clergyman insisted that if Okechukwu wanted to marry his daughter, he should relocate from their 50, Karounwi Street, Adedeji bus stop, Itire residence.

It was gathered that Okechukwu neither relocated nor stopped dating the pastor’s daughter. This had always led to quarrel between the two neighbours.

On the day of the incident, the pastor allegedly engaged Okechukwu on the same issue and the argument became intense and resulted in a fight.

But immediately the pastor slumped, the suspect who is a native of Mbaise in Imo State, also in the Southeast, ran away.

The corpse of the victim has been deposited at a mortuary in Surulere, Lagos for autopsy.

The Divisional Police Officer, DPO, at Itire Police Station, was not available to comment on the incident. But a source at the station who craved for anonymity, confirmed the incident, adding that the matter is being investigated and police have organised a manhunt for the fleeing Okechukwu.

The pastor’s daughter could not be reached as at the time of writing this report.

However, one of their neighbours who spoke on condition of anonymity said, “she has been in a serious dilemma since the incident occurred.”