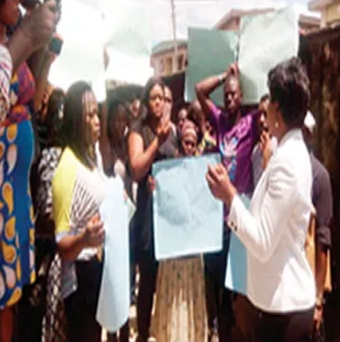 Officials of SCIID Panti Yaba have arrested a property developer and a pastor for allegedly using a church building, located at Coker-Aguda area of the Lagos metropolis to defraud over 80 home-seekers of N22 million

The developer is identified simply as Mr Tajudeen while the pastor is Don. The apartments causing furor are located on top of a church. The church has been sealed by the Lagos State Ministry of Physical Planning and Urban Development.

The ministry said the apartments were sealed over failure of the owner to comply with building regulations and lacked evidence of government approval to construct the apartments.

Trouble started when home-seekers, who paid for the apartments, found out that the property developer, Tajudeen, had defrauded them. They couldn’t gain entry into the apartments.

One of the victims, Mr. Tunde Yahaya, said: “I’m the coordinator of the Coker-Orile House Scam Victims. Sometimes last month, I saw an advert on a house at Coker-Aguda. I called the mobile number and an agent told me to meet him at the property. When we got to the house, I found out that the apartments, eight in number, were located on the top of a church building. The apartments were almost at completion stage. The agent took me to the developer, Tajudeen; he told me that the mini-flat was N220,000 per annum.

“I paid N110,000 into his Diamond Bank account and took the teller to him. He gave me a receipt and promised me that the house would be ready within a week. Before I paid him, I had gone to investigate from the church if he was genuine developer. I met Pastor Don; he assured me that Tajudeen was in charge of the apartments on behalf of the church.

“I inquired from the church on two occasions, and got the same positive response; that was why I went ahead to pay. However, to my greatest shock, I went to the house on the day he told me to come for my keys and met other people fighting over the same apartments.

“We were over 80 that came for the apartments; some people hired ‘area boys’ to help them secure the rooms. The situation became chaotic and serious fighting broke out. Some people got injured; others ran to report at the nearest police station. We also protested, urging government to come to our aid. We were defrauded over N22 million. When the trouble started, the developer was nowhere to be found. He even switched off his phone; but police finally arrested and took him to the SCIID, Panti.”

Another victim, Chinedu, said: “I paid N240,000 for a self-contained room at Aguda. The developer told me that the rent was N280,000, but I paid N240,000. I thought that since the church owns the property, there would be no scam. But to my shock, pastor of the church, who took me to the developer, denied being involved in the scam. I went to the house to take possession, but met many people fighting over the apartments. That was when I knew I had been duped.”

A human rights lawyer and Chief Executive Officer of International Centre for Non-Violence and Safety (ICHR), Ene Sarah Unobe, said the victims paid for apartments, but later discovered other tenants already occupying them.

She said: “The property developer built eight mini-flats or what is called self-contained apartments on top of the church building. They collected money from over 80 house-seekers for eight rooms, while the building was still under construction.

“However, trouble started when the tenants got to the house on the day they were told to take possession and met other people already occupying them. 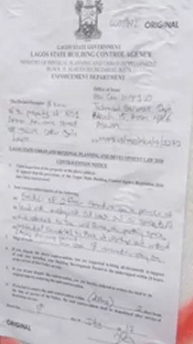 They brought a petition to our office, and we had been assisting them in collaboration with the Lagos State government to get justice.”

It was learnt that the victims mobilised themselves and protested to the Lagos State Ministry of Housing and Urban Development, prompting government to look into their plight.