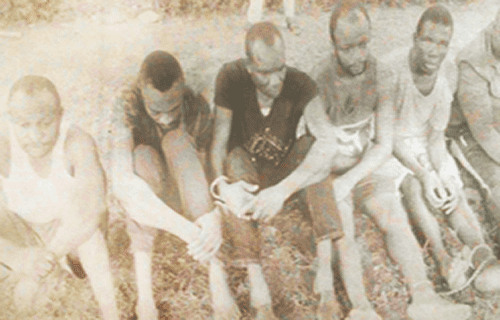 About 5 police gangsters in Delta State are currently telling the state Command what they know about the hijack of petroleum tankers along Benin-Asaba expressway.

Five of such men were recently arrested by the Command as DOMINIC ADEWOLE, reports from Asaba.

The arrest of some police gangsters in Delta State on June 21, 2017, has left unsuspecting members of the public wondering about the kind of friendship the Nigeria Police Force (NPF) has established with them.

This was what the ringleader of the suspected criminally-minded police officers that were recently arrested in the state, had to say when they were caught.

“Since I was dismissed from the Nigeria Police Force some years back, life became worse for me. My family and I found it difficult feeding. I cannot pay my siblings school fees. That was how the hard way became the only way for me. My heart was troubled. So, I thought of hijacking a petroleum truck that will fetch me good money to meet my needs. I sold the idea to my friends, who are in service and they bought into it. That was how it all started.”

This was the shocking confession of one Kingsley Ochei, a 37-year-old dismissed policeman, who hails from Ekuoma Community in Ika North East Local Government Area of Delta State.

The truck was heading to Onitsha in Anambra State with the consignment, which he lifted from Oghara, Ethiope West Council Area of the state.

Kingsley’s shocking revelation did not only indict men of the Force on the burning issue of bribery and corruption, it confirmed the speculation of suspecting members of the public about how policemen were collaborating with robbers and leasing out their riffles to them for criminal operations.

The Commissioner of Police in the state, Zanna M. Ibrahim, who expressed displeasure that his men ran down the avowed ‘Quick Response’ and ‘combat readiness’ of the command when he paraded them at the command headquarters in Asaba, lamented that the ‘police’ bandits ambushed the victim at Alifikede, around Agbor, the boundary between Edo and Delta states, in Ika axis of the Big Heart State, having pretended to be men of Anti-Vandal Team.

“Fortunately, the telephone handset of the kingpin of the gang named Kingsley Ochei, a dismissed Police Officer was recovered at the scene. SARS men immediately swung into action and arrested Ochei. He confessed and mentioned other five suspects listed above and subsequently they were equally arrested”, the CP said.

South South Focus investigations revealed that the dastardly act of Ocheu and his cohorts had since it was committed on June 21, 2017, aggravated the fears in indigenes and residents of the state, especially those that have been robbed in similar circumstances on that route, about the criminal tendencies in some of those that have been recruited into the Force.

On interrogation, the gang leader confessed that he was thrown out of the Force after he committed some undisclosed acts of indiscipline.

“Life has not been the same for me” he stressed. Continuing he said that, “the whole thing became worse for me. All my colleagues that I relied upon to be of help and assistance to start up a business failed me. Since I have nothing to fall back upon because every eye was on me as a dismissed policeman, and I have a family to take care of. Many thoughts started crossing my mind.

“When things are terribly rough at times, I will call on some of my colleagues when I was in service, if they are on patrol, I will hang on with them. If anything comes out, they will share little for me to keep life going.”

While the CP assured the public that the serving policemen will be internally disciplined, dismissed and subsequently prosecuted, Kingsley maintained that it was frustration that led him to the crime.

Hear him again, “As I said before, frustration of life forced me into this crime. Devil tempted and lured me into armed robbery. I beg for forgiveness.”

He swore that his gang had not laid hand on any of their victims since they formed their gang, saying, “We don’t kill. We have not killed anybody. We only hijack trucks loaded with petroleum products.”

He said he has always had smooth operations because of the ‘gallantry’ performance of his gang members.

“With the presence of my serving colleagues, we usually find our way to any petrol station where a friend is and we sell the products and share the money”, Kingsley confessed.

The kingpin, who vowed not to lie but say the truth because the game was up, further confessed that they had successfully hijacked many trucks and sold their products at the rate of N1.8 million, N2 million and N3 million respectively, depending on their quantity. “We share the money among ourselves, and with my share, I am able to fend for my family.”

However, the alleged receiver of the stolen products, who runs a petrol station at Abavo, claimed to be a benefactor to the dismissed policeman.

“Yes, he is my friend. He normally visited my station and from time to time, I dash him money because of his pitiable condition. In most cases, I dash him from N5,000 or N10,000 and above.

“On a particular day, he told me in confidence that he has some products given to him, and because he is a close friend, without asking about the source, I bought it from him. He has sold products to me for about three times without any problems until this last one that led to our arrest.”

The CP lamented that the suspects handcuffed the driver and the conductor, pushed them out of the truck along the thick bush of the Benin-Agbor-Asaba Expressway.

“But nemesis caught up with the kingpin of the gang. His GSM phone was recovered at the scene of the crime. Immediately operatives of the Special Anti-Robbery Squad (SARS) swung into action and arrested the dismissed officer, whom upon interrogation, confessed to the crime and revealed the other five gang members, including the serving policemen.”