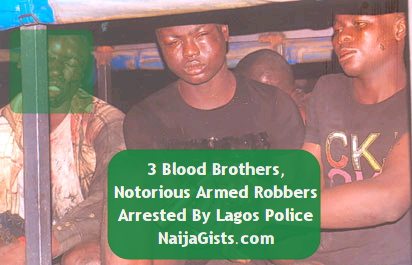 Three blood brothers, recently in Lagos, made startling revelations when they confessed that they earn their livelihood through armed robbery. In fact, the eldest of the brothers confessed that they used their younger brother to get vital information on their victims.

Their robbery exploits were blown open recently after members of Lagos State neighborhood watch arrested them in Otto-Awori Local Development Council. The three brothers identified as Kabiru Sesan,25, Toheed Sesan, 23, and Femi Sesan, 19, were alleged to have robbed one Mr. Chude at gun point who reportedly just arrived the country from a trip overseas.

One locally-made pistol was said to have been recovered from the suspects while they were sharing their loot in an uncompleted building at Etigbi Community in the area. Sources said the suspects got information about the arrival of Mr Chude through his female house help (name withheld) who happened to be the girlfriend to one of the suspects, Femi.

Their eldest brother, kabiru boldly told Crime Guard when he was cornered at the office of the vigilante group that robbery has kept food on their table since the death of their parents. He also confessed that they were the brains behind the incessant robbery attacks within Etigbi community stating that he asked his younger brother to go into a relationship with their victim’s house help because they knew he is based in United States of America and normally come back with a lot of money.

The younger brother, Femi, however told Crime Guard that he did not know that his brothers had evil intention when they asked him to go into relationship with the housemaid. According to him,”I was surprised when

My brothers told me to go into that relationship with the maid,and I never had the knowledge that my brothers were armed robbers.

I was so surprised, even when I asked my brother why? he said that I should just do it. There was a day my brothers told me to get information on when Mr Chude will return back to the country. I was confused but I did as they said. That was all I knew until I got a call from an anonymous person to come to Shibiri round about within the community, on getting there, I was handcuffed by the vigilante group.”

The leader of the vigilante group, Alhaji Saka Owoyami, narrated how they rounded up the three brothers to Crime Guard. “We got a call from an unidentified person who said he heard a gun shot from a flat nearby. We quickly went into action but before we got to the place, they had disappeared after shooting one of the residents.

We started combing the area and ended up fishing them out in an uncompleted building where they were busy sharing their loot. After interrogations, we were shocked to discover that they were blood brothers.

They named their younger brother as their source o f information. We swiftly went into action and arrested him and after interrogation, we handed them over to the police at Hausa-Ihemba division for further investigation and possible prosecution. (Source:Vanguard)

Actor Joseph Benjamin Set To Divorce: I Married My Wife Out Of Pity Because She Got Pregnant
Nigerian Actor Yomi Fabiyi To Marry Oyinbo Wife In UK Next Month