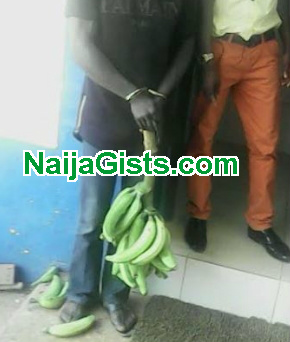 A selfish police inspector attached to the Railway Police Command, Ebute-Meta has been arrested for stealing bunches of plantain.

The suspect identified as Joseph was arrested on Tuesday while  trying to hide the plantain in two trucks.

He reportedly committed the offence around 12 pm when he went to the Commissioner’s lodge.

Inspector Joseph was said to have harvested several bunches of  plantains without any permission.

It was learnt that a senior police officer in the command ordered his detention and his arraignment for the crime.