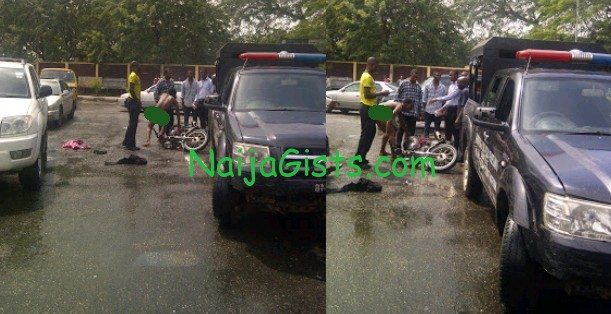 Just few weeks after a terrible jungle justice was carried out in Aluu, Port-Harcourt in the presence of some Nigerian Police Officers, another one with evidence has been carried out in broad daylight in Lagos State Nigeria. naijagists.com

According to an eyewitness who witnessed this injustice being carried out by Nigerian Policemen at University Road junction off St Finbarr’s College Road in Akoka area of Lagos State Nigeria on Wednesday, an Okada rider (man) was brutalized and stripped naked after a minor argument with the policemen.

Contrary to fake police report, a witness said the Okada rider didn’t resist arrest. He said the policemen who laid ambush in a van tagged with plate no NPF9544B beat the rider mercilessly and ordered him to take off all his clothes after he allegedly argued with them.

As if that wasn’t enough, he was later beaten to stupor by the policemen who took it upon themselves to teach him a lesson of his life.

If the police force are behaving this way, what do you expect ordinary citizens to do.

Fashola should investigate these mumu officers and bring them to book.