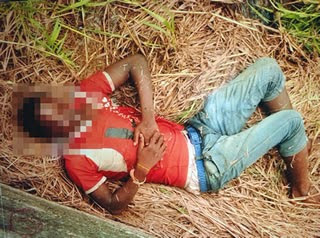 The police in Lagos have arrested the son of a police officer, Sunday Omosuyi, and a painter, Qudus Mustapha, for alleged involvement in cultism and the killing of one, Taiye Iyanda.

The victim, who was a member of the Oodua People’s Congress, was the son of a police officer attached to a division in the Ajegunle area.

Our correspondent learnt that the victim was hacked to death by suspected members of the Eiye Confraternity over the money that a politician gave out to be shared between the OPC and cult members.

The incident happened on Bako Street, in the Ajegunle, Ikorodu area of Lagos.

A resident of the area, Johnson Jibo, said, “In the build up to the general elections, a member of one of the political parties visited the Ajegunle area in Ikorodu and gave out about N200, 000.

“The money was to be shared by the OPC and the Eiye members in the area.

“The two groups were always at each other’s neck in the community and had been having a running battle.

It was gathered that the matter was reported at the Owode Onirin Police Division, where the victim’s mother worked.

The police were said to have launched a manhunt for the killers of the victim.

The search led to the arrest of Omosuyi and Mustapha, who both confessed to being members of the Eiye Confraternity.

They, however, denied knowing each other, just as Omosuyi denied being part of the squad that killed the victim.

He said he joined the cult group so he could “feel big and have a sense of belonging.”

He said, “I am a member of the Eiye Confraternity. I am ashamed of myself because my father is a retired customs officer while my mother is a serving policewoman.

“She had warned me several times that I should stop before I get caught and disgrace the family, but I did not listen.

“But I was not with the people that killed the man.”

Mustapha also said he knew when the victim was killed, but he did not join others in hacking him with machetes.

Mustapha, who said he joined the group for about one year ago, said he never knew the group was into killing.

He said, “On the day Taiye (Iyanda) was killed, the OPC members had first attacked us. They returned later in the day and chased us.

“We went to regroup and chased them back, which was how they all ran away.

“There were three of us pursuing Taiye and when we got him, my mates who had cutlasses, started hacking him till he died. I don’t know about it. And I beg for forgiveness. “

A source, however, told PUNCH Metro that the suspects did not reveal the whole truth.

The source said, “Omosuyi, for instance, has his own gun that he uses for operation. All those Eiye members are the same and they have been terrorising the Ajegunle area for some time.

“But with the arrest of these ones and others we are trailing, I am sure sanity will return to the area.”