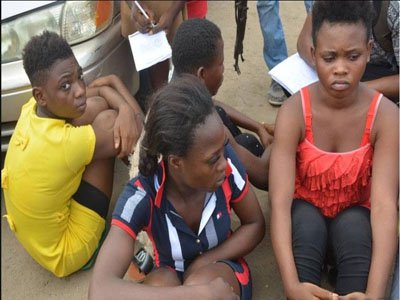 A young girl on Tuesday told reporters that she serviced three men per night, charging them N1,000 each.

The girl said frustration led her into prostitution, claiming that she came to Lagos in search of greener pastures but could not find help.

Lagos State Police Commissioner Imohimi Edgal paraded her and some girls caught in a hotel in Iyana Ipaja at the command headquarters in Ikeja.

The police chief accused them of working for a syndicate responsible for forcing teenage girls into prostitution at Iyana Ipaja.

Among those arrested were three other girls as well as Emmanuel Thomas, 29, and Okon John, 34.

Edgal said Thomas was one of the coordinators of the prostitution ring, which operated from Collabor Hotel, adding that he brought underage girls to Lagos for the trade.

The hotel, he said, was raided after the police received intelligence report.

One of the girls said: “I have been into this for four months now. I came to Lagos to hustle.

I do not have family members in Lagos. The only option I had was to do Ashewo work. So, I came to the hotel and I was given a room. I service three men each night and I charge N1,000 for each of them. From the N3,000, I settle the hotel people and I take care of myself. I was arrested at Collabor Hotel.”

One of them, who is a mother, said she usually went to the hotel to hustle because she had to take care of her three-year-old baby.

She said she worked as a sales girl at a grocery outlet but the pay was not regular, adding that going to the hotel provided her money for their upkeep.