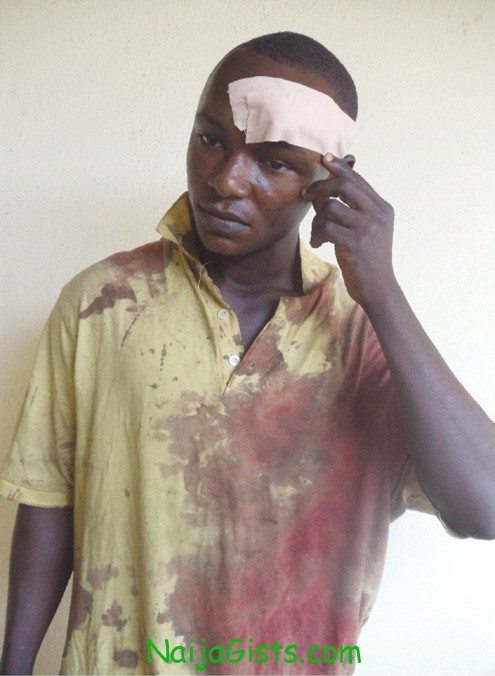 The workers of the Lagos State Public Works Corporation, LSPWC, have appealed to Governor Babatunde Fashola to save them from attacks by uniform men while mending Lagos roads.

The appeal is coming on the heels of battering received by nine workers of the corporation in the hands of officers at the naval base, Ahmadu Bello Way, Victoria Island, on Wednesday.

P.M.NEWSgathered that the LSPWC workers were brutalised by the naval officers around 11 p.m. while repairing a damaged portion of the Ahmadu Bello Way in front of the naval base.

Two of the workers, Abhuohlen Daniel and Babatunde Olamide who were seriously wounded, were rushed to the hospital, it was learnt.

Investigations revealed that the workers were about to pour asphalt on the damaged portion of the road when a naval officer on guard at the base stopped them and ordered them to move their vehicle away from the gate of the naval base.

Pleas by the workers to the naval officer to allow them do their job fell on deaf ears as the officer and some of his colleagues insisted that the vehicle must be removed from the gate of their base.

An argument ensued and the naval officers attacked the workers. Some of the LSPWC workers were dragged into the naval base and brutalised, P.M.NEWSgathered.

One of the injured LSPWC workers, Abhuohlen Daniel, said he was kicked and his clothes removed while he was hit with the butt of the gun when he was dragged into the base.

A naval officer at the cantonment who spoke on condition of anonymity because he was not authorised to talk to journalists, however, denied the workers version of the incident. “Some of the workers were urinating on the flowers planted by the base and we asked them to move away but they continued. One of our officers pushed one of them away from the flowers and they started abusing us. That was what led to the scuffle,” he stated.

He disclosed that a senior officer came out of the base and ordered the naval officers back to base to enable the LSPWC workers continue their work, “but they refused to repair the damaged portion in front of our base.”