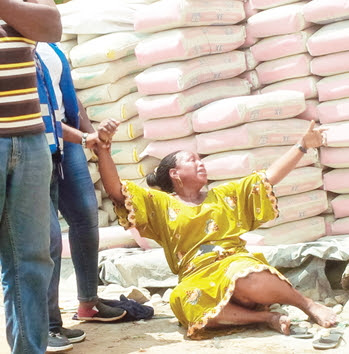 Shop owners on the popular CMD Road near Magodo on the Lagos Ibadan Expressway wept non stop on Tuesday as Lagos State Government officials destroyed their shops with bulldozers.

The traders seen rolling on the ground and wailing yesterday claimed that the officials had dislodged them from their only source of livelihood.

The traders who are illegal occupants on CMD Road for many years sell building materials while others sell different types of flowers to motorists and residents of Magodo Government Reserved Area.

For over an hour on Tuesday, there was confusion among the traders who were rushing to salvage their goods and wares to avoid being demolished by the approaching bulldozers deployed the Enforcement Department of the state Ministry of the Environment.

The operation led by Dr Tajudeen Afolabi , the Director of Enforcement and Advocacy was meant to clear illegally occupied areas of shanties considered as environmental nuisance.