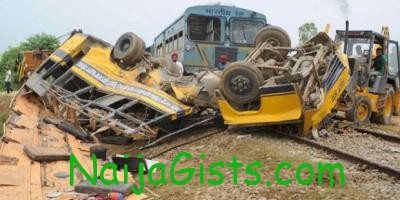 Well over 900 passengers escaped death on Friday morning when a 10-coach Iddo-bound train rammed into a truck at Ilupeju Railway Crossing near Oshodi, Lagos.naijagists.com

The accident, which occurred at about 7.30 am, led to traffic gridlock on the Ilupeju/Oshodi Road for several hours.

The News Agency of Nigeria reports that each of the coaches has 90 seats, but they were usually overloaded. An eyewitness told NAN that the articulated vehicle blocked the railway crossing when the train was already close by. The loaded trailer had crashed into the double barriers on the railway crossing shortly before the train arrived. On seeing the approaching train, the driver jumped out of the trailer and ran away.

The train then dragged the truck for some distance, scattering the goods inside it — which were mostly empty cartons of Malta Guinness drink – along the track. The dragging of the truck also led to the damaging of some vehicles parked along the rail track by auto mechanics. The accident caused some damage to the engine of the locomotive and the track.

NAN reported that the incident was the third time in the month of August that a passenger train would ram into vehicles at railway crossing in the Lagos metropolis. The earlier two accidents occurred at the Ikeja railway crossing, and claimed some lives. Confirming the accident, Mr Ademuyiwa Adekanbi, the Lagos District Public Relations Officer of the Railways, said that no life was lost in the incident.

Adekanbi said that the corporation had embarked on enough enlightenment campaign on the use of the railway crossings. “We have done enough jingles on radio and television, we have rallies and distributed fliers to sensitive people of the right of way of a train at level crossings,” he said.

Thank God for their miraculous escape from death.

That would be a big tragedy.