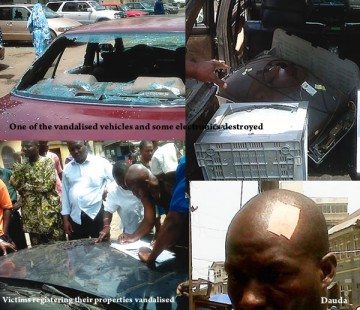 Over 40 vehicles was vandalized on Sunday March 4th, 2012 after some hoodlums hit Ebute-Meta in Lagos State, Nigeria. naijagists.com

We learnt some youth supporters of Mr Alao Owolabi, a member of the House of Rep. representing Lagos Mainland clashed with the hoodlums.

2 Tricycles and 7 shops were also vandalised.

According to punch, an eyewitness, who craved anonymity, said the lawmaker’s supporters besieged the area to avenge the harassment meted out to him by some hoodlums on Saturday.

He said, “Yesterday (Saturday), when he (Owolabi) was driving home, some youths hailed and wanted him to give them some money. But he declined and the youth banged his car in annoyance. So, the lawmaker brought in some policemen and identified the man who banged his car. However, the youth did not allow the policemen to take the man away and this resulted in a fight. During the fight, the lawmaker’s cloth was torn.

“When the violence escalated, a policeman shot one person in the hand. Later, the policemen reinforced and started shooting. This morning (Sunday), we just saw some area boys from Otto who besieged our neighbourhood. They started shooting and destroying shops. They also took away telephones and money from traders.

“On their way back, they met a policeman in mufti coming from a church and wanted to rob him. But the policeman resisted and they shot him. He also brought a gun and shot in the air to escape. In the ensuing confusion, one person was killed.”

Mr. Adenowo Raji, whose car was also damaged, said the police had assured him that those who suffered losses would be compensated.

Raji said, “The incident was a spill over of what happened on Saturday night. Some youths at a social event harassed the lawmaker on his way home and I think some of his sympathisers came to avenge what the youth did to him.

“But unfortunately, they went on the rampage and started destroying property of innocent people. It is very pathetic that this could happen in a broad day light. The police have advised that we should record the destruction with a video camera and also take pictures.”

Another victim, Mr. Lukman Balogun, said those who suffered losses should be compensated.

“I am sure more than 40 cars were damaged. We want everything to be replaced. It is an insult to the community,” Balogun said.

Another victim, who identified herself simply as Mrs. Sherifat, said goods in her shop at 19, Herbert Macaulay Street were stolen by the hoodlums.

An electronics dealer, who identified himself simply as Dauda, said, “The hoodlums came to meet me and insisted that I should give them money. When I refused, they brought out gun and another attacked me with a cutlass. They took the N25,000 with me; damaged my car and goods worth N200, 000.”

A trader at the scene, who was also affected, Ngozi Onyeachi, said all she depended on had been stolen by the hoodlums.

She said, “They destroyed all my drinks and took away the N62,000 I collected from my monthly contributions. The police should ensure that my money is returned.”

Efforts to speak with the lawmaker proved abortive as policemen guiding his residence turned our correspondent back.

When contacted on the telephone, the spokesman for the state police, Mr. Joseph Jaiyeoba, said he could not reach the Divisional Police Officer, Denton Police Division, under whose jurisdiction the violence occurred, to confirm the incident.