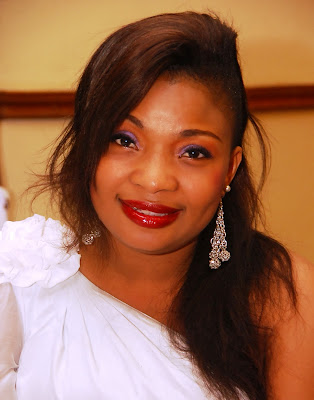 Beautiful mother of one Nollywood actress turned movie producer Laide Bakare has dumped her ex-husband for a new lover.

According to her publicist, she dumped her ex-husband when she discovered the man is still legally married to another woman.

As we speak, Laide Bakare has found love in the heart of a Lagos-based business man identified as Tunde Oriowo.

Tunde and Laide Bakare are currently on vacation in the United States of America.

The new lovers plan a big wedding ceremony before the end of this year.

Read the official press release from Laide Bakare’s publicist below

Dear Sir,
We would like to announce to the general public on behalf of Nollywood star actress, Laide Bakare that she has officially opted out of her relationship with Mr. Okunfulire, her former husband.

While it lasted, the actress showed the utmost level of maturity, in spite of the “glaring injustice’ from her former husband.
Laide has endured the marriage with Mr. Okunfulire to whom she displayed total affection. But things fell apart when she discovered that she was indeed married to a man with a legally married wife and two children not a single man she thought he was as told her by Mr. Okunfulire when the relationship started.

But, being a celebrity who has become a model to young persons in the society, coupled with the need to exercise decorum, she has kept fate with the marriage until lately when she could no longer continue and then called it quits.
Her former union with Mr. Okunfulire produced a beautiful child, Similoluwa who is nicknamed Chelsea.

Meanwhile, Laide has just entered into a new relationship with a Lagos based popular businessman, Mr. Tunde Oriowo. The relationship began late last year and culminated in the lovers officially sealing it with the Muslim rites called Nikkai, at a quiet ceremony in Lagos attended by trusted associates and close family members from both sides.

Laide Bakare and Mr. Tunde Oriowo who both are currently holidaying in the United States of America, will be holding the wedding proper with a big bash before the end of 2013.