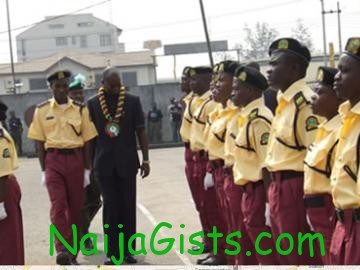 May 22, 2012 – LASTMA Officials Sent To Kirikiri Over Bribery

The Corrupt Officials are;

The accused pleaded not guilty and were granted bail in the sum of N200,000 each, with two sureties in like sum, but they could not meet the bail conditions and were remanded at Kirikiri. The matter was adjourned till 19 June, 2012.

Investigations revealed that the other two men arrested posed as LASTMA officials and helped the real LASTMA officials to collect bribe from motorists. The culprits were brought to the Office of the Lagos State Taskforce on Environmental and Special Offences (Enforcement) Unit, Alausa, Ikeja and were detained on Friday before they were later arraigned in court. Taskforce Chairman, Bayo Sulaiman, said the law must take its course, saying that the culprits must be punished according to the laws of the state.

If every state can take law seriously like Lagos, Nigeria will be a better country.