On Wednesday, the new wife of Honourable Dino Melaye packed out her matrimonial home over constant beatings.

The BBM chat between the two women has been leaked by Tokunbo Melaye to expose the violent lifestyle of Dino  Melaye. 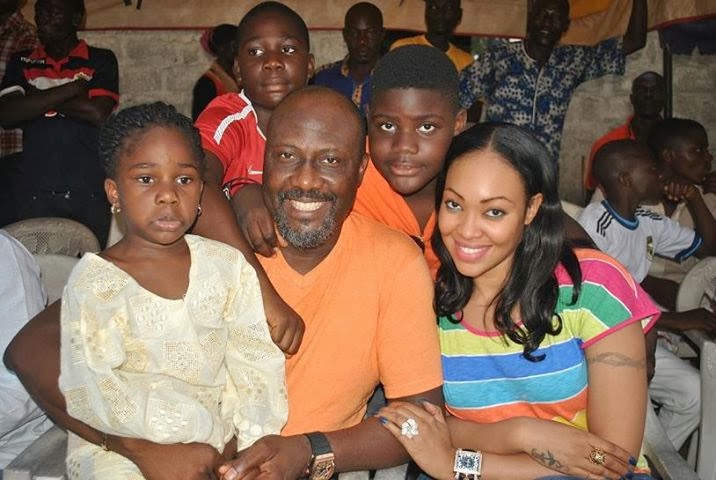 Check out the leaked chat below;

Tokunbo: I sent dis msg to u last nite. U replied with I love him msg… Pls I need Sams number. I want to give him his life history n send him my heartfelt prayers for his daughters. They will marry men exactly like dino and have inlaws exactly like the Melayes in Jesus might name
Alero: Dino took my phones off me that time. He must have deleted it so I didn’t see it
Alero: I’m out of his life fo rgood I hope he meets a woman that will care for your sons. Better still, if you can forgive him, 3 kids is not easy. I wish you all the best

He is brainwashing your boys. Make sure you talk to them. I’ve told them there is no love like a mother’s. Father’s too are good but mother is ultimate. Sorry for your pain. I’ve known Dino since June last year. Not 4 years like I was lied upon. I too was played by him. So sad
Tokunbo: How are you doing Were u d one sending me text msgs last night with the oda line?
Alero: Other line? No oh. I’m doing okay. He locked the doors and said I can’t go. Beat up my car hire driver. I’m so upset. I insist on leaving today
Tokunbo: With d little u experienced in 6 months and all the lies will u advice even an enemy to go back to such a man. Alero! no mata how much he brainwashes dem. de saw n de remember all d beatings, maltreatment and the prostitutes he brings to the house. By God’s grace dey will be nothing like him. The Fabiyi blood in dem will speak louder dan d melaye lying blood IJN. I wish you well Takia
Alero: Amen I know it is hard being a single mum oh. But if you can muscle it like I’ve done for years. I hail you

Alero: Pls leave the internet alone the wolrd has no business iwth our personal lives and problems
Tokunbo: Alero if dis msg is from u call me now! I’m startin my prayers in 20 mins
Alero: It is okay, I don’t mind . As much as I hate publicity of any kind, I know what’s news today is dead and gone tomorrow. The important thing to me is that you now know the true nature of how and when I met Dino. Or shoudl I too say Bingo. Lol. I don’t know you well but cos I ‘ve lived in your hell, its easy to blend with you.
Tokunbo: Hahahah I see u still have her phones. Smh well times up. Going to report ur evil lying family to my maker. Teh prayers for tonite can be found in deut 28:15-68 and psalm 35. Can I hearan Amen. LOL
Tokunbo: Na bingo nau dat who what he is. You can’t begin to imagine Alereo. Afer a while I stopped hurting, I just became indifferent. I tink dats ow I coped for soo long. Den my kids became d centre of my universe n dat made it ok.
Alero: Pls I’m an extremely private person, pls pls keep this out of the internet. I plead with you. Thanks and tlak to you as planned.
Tokunbo: I beg you in God’s name, can you help me get Gbotemis international passport? I’d like to travel with her for summer 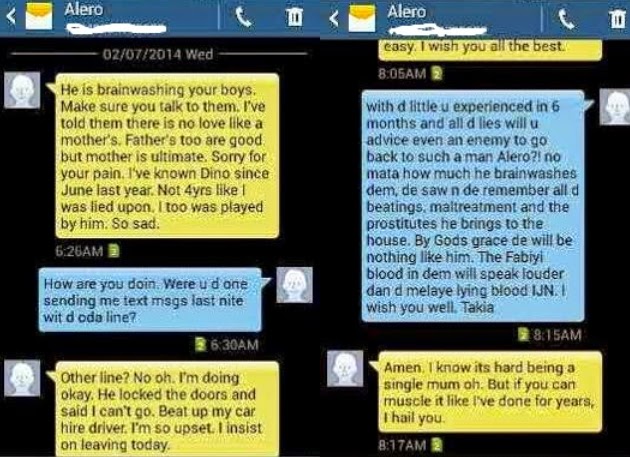 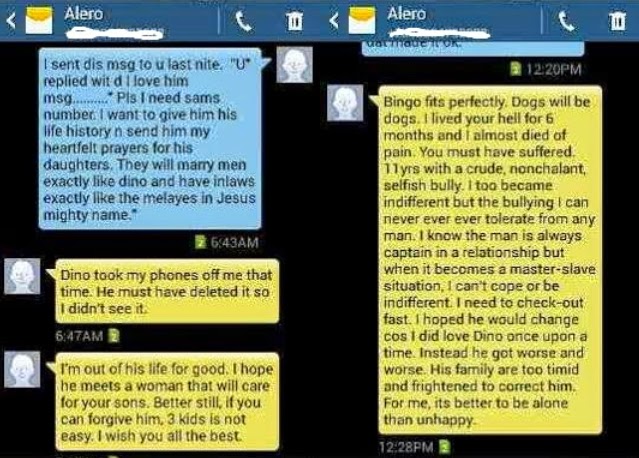 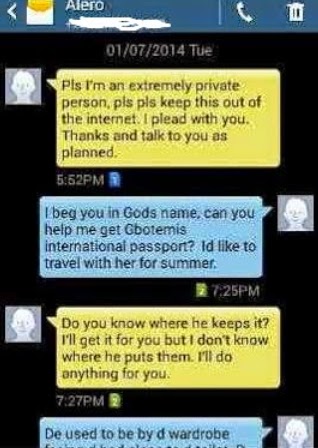