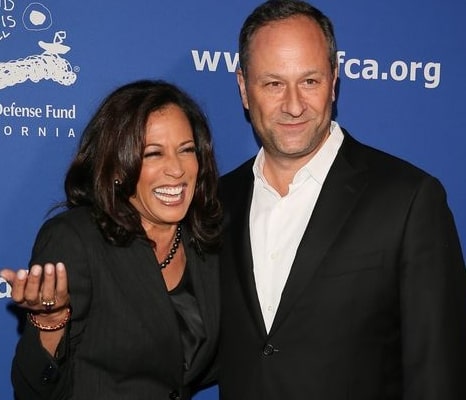 Stanford Professor and Nobel Laureate, Alvin Roth, in a research work titled Deferred Acceptance Algorithms, posits that, regardless of how successful any of the partners is in marriage, both spouses are likely to be happy if they understand contentment. The Roth’s rule is still largely valid especially for men who feel insecure around successful women.

Professor Roth’s rule has been strengthened by Anna. N: et al (2015) through their research titled, “An Examination of How Husbands, As Key Stakeholders, Impact the Success of Women Entrepreneurs” in the Journal of Small Business and Enterprise Development. They conclude in their research that husbands’ support for their wives increases the chances of the women becoming successful women entrepreneurs and business leaders. Here are seven men whose wives are making waves globally and who credit much of their success to the support received from their husbands.

While the world talks about all the glass ceilings that Vice-President of the United States, Kamala Harris, has shattered by becoming the first woman and first Black person of South Asian descent to be elected US vice president, there are quite a few stereotypes that her husband, Douglas Emhoff has broken himself.

With the creation of his official Twitter handle by the Biden administration, Mr Emhoff becomes the first Second Gentleman in all of US history. He is also the first Jewish spouse of a vice president.

Douglas Emhoff was born in Brooklyn to Jewish parents, Barbara and Michael Emhoff. He studied at California State University, Northridge where he earned a Bachelor of Arts degree and a Juris Doctor from the USC Gould School of Law. He has had an illustrious career working with several law firms like Pillsbury Winthrop, Belin Rawlings & Badal, and his own law firm before finally ending up at DLA Piper as a partner. He is also a distinguished visiting professor at Georgetown University Law Center.

Mr Emhoff has said that as Second Gentleman, he will continue to advocate for reforms in the legal justice system and help American citizens gain access to the legal system. He remains an example that men can be in supportive roles of their spouse’s career success.

Dr Ikemba Iweala hails from Umuahia, Abia State. He is an alumnus of the prestigious University of Ibadan, Nigeria. He also completed his compulsory National Youth Service Corps (NYSC) at the Rural Health Center, Igbaja in Kwara State, where he worked as the Centre’s Physician. Dr Iweala completed his training in General Surgery/Trauma and Neurosurgery at the Manchester Royal Infirmary, Manchester, and various other hospitals in England. He is also a Fellow of the Royal College of Surgeons of Edinburgh and a Fellow of the Royal Society of Medicine since 1984. Following Dr Iweala’s further work at the University of Maryland Medical Systems, Baltimore, he was appointed a clinical instructor in Emergency Medicine at the George Washington University Hospital in Washington DC. For his medical exploits, Dr Iweala won the famous University of Ibadan’s Winthrop Scholar Award for Medicine in 1975.

In addition to Dr Iweala’s contributions to clinical medicine, he is a philanthropist. He founded and heads the IKE Foundation for Autism (IFA), an NGO established in 2008 to enable persons living with the autism spectrum disorder and related needs to achieve their full potential and live productive lives.

Dr Iweala has proven to be a good family man despite all his medical achievements and busy schedules. He is happily married to Dr Ngozi Okonjo-Iweala, Nigeria’s two-time minister of finance and one-time minister of foreign affairs. She has also served (still serving as) member and heads of the Boards of international corporations including Twitter, GAVI, ARC and organisations of such ilk. She is also in pole position to become the first woman and African to become the Director-General of the Geneva-based World Trade Organization (WTO).

Together, they have one daughter and three sons. Their only daughter, Onyinye, is an Assistant Professor of Medicine in the Division of Rheumatology, Allergy, and Immunology at the University of North Carolina School of Medicine. One of their sons, Uzodinma, is an award-winning author and accomplished medical doctor. His debut novel, Beasts of No Nation, was published in 2005. A feature film that was adapted by Cary Fukunaga, starring Abraham Attah as Agu and Idris Elba as the commander. The movie was premiered on Netflix on October 16, 2015. The other two sons – Okechukwu and Uchechi – are also making great exploits in their chosen fields.

Casey Dunn is married to Mitchell Baker, the CEO of Mozilla Corporation. Mozilla Corporation is a multi-million-dollar organization which wholly own the subsidiary of the Mozilla Foundation which specializes in the development of Internet-related applications such as the Firefox web browser, by a global community of open-source developers, some of whom are employed by the corporation itself. Mitchell has been included in the 2005 edition of Time magazine’s 100 Most Influential Persons in the World.

To state her husband’s remarkable contributions to her career and business, she referred to Casey as “one of Mozilla’s great anonymous contributors.” Casey himself is a software genius who graduated from Stanford University and is currently a part of CZWX LLC, a Silicon Valley software development consulting firm. In addition to this, Casey has previously worked as a part-time book slinger.

For the most part, many men would not have been able to cope with a woman with such profile as Mitchell’s but, Casey had a different idea: he worked behind the scenes to help his wife’s business grow using his expertise as a software genius to help Mitchell’s business become a company generating $409 million in revenue and a global brand.

Abiodun Awosika is the Managing Director/CEO at Excel Exploration and Production Company – one of the leading actors in the Nigerian petroleum industry. He is married to Ibukun Awosika, a businesswoman, author, and motivational speaker. Ibukun Awosika is also the Chairperson of the Board of First Bank Nigeria Plc.

Despite her busy agenda and success in the professional field, Ibukun still shares her experiences with her husband whom she refers to as her mentor. Together, they have three children. When talking about her marriage and her role as a wife and mother, she says her husband has been of immense assistance to her because he “supports my dreams and desires.”

Observing the couple, one would readily observe that even though both have extremely busy schedules, they never fail to support each other’s dreams and aspirations. Ibukun is no doubt proud of her husband and his impacts on her life and career.

Ivara Esege was born in 1967. He is a US-based medical doctor and a Professor of Medicine at the University of Maryland. Ivara married Chimamanda Ngozi Adichie, 44, who for most people needs no introduction. She is the author of highly revered novels including, Purple Hibiscus (which was for so many years on Man Booker List of Literary Books), Half of a Yellow Sun (which was released to great critical acclaim in 2003 and 2006), and Americana.

While many people know Chimamanda, not too many people know her husband who is largely a quiet and media-shy person. Also, what many people may not readily know is that Ivara plays a role in sustaining the smile that readily graces Chimamanda Adichie’s face. It was reported that after the couple welcomed their daughter, it was Ivara’s responsibility to look after her in the first six months while Chimamanda continued with her activism and writing. This is something some men will rather die than do.

Clarke Gayford, 44, is a broadcaster married to the New Zealand Prime Minister Jacinda Ardern. He attended the famous Palmerston North Boys’ High School. He later, in 1995, proceeded to the Otago University to study for a Bachelor of Arts, before transferring to the New Zealand Broadcasting School in Christchurch, New Zealand. While studying at the Broadcasting School, he successfully pitched student-life show Cow TV (1999) to Dunedin’s Channel 9.

In 2015, he went into partnership with producer Mike Bhana to create fishing show Fish of the Day, for Choice TV. The documentary series is also broadcast on National Geographic Channel and has screened in over 35 countries.

Several reports confirm that Gayford engaged Ardern to be married in 2019. According to a Radio New Zealand report, he has accompanied Ardern on international visits, including the 2018 Commonwealth Heads of Government Meeting in London, UK.

Finnes was Head of Department in industry and industrial policy in Norwegian Industry from 1998-2017. Before that he was a teacher at Kolvikbakken Ungdomsskole in Ålesund 1989-90 and editor in Gyldendal 1992-98.

About the author: Olalekan Adigun, a public affairs analyst, writes from Lagos