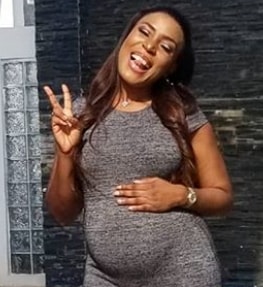 Then, hear Kemi who had always criticized Linda. Currently battling Post Traumatic Stress Disorder as a result of the prison she went to in Port-Harcourt, Ms Olunloyo said,

“ Linda is not pregnant. She is not even engaged. She never announced it, someone did that for her. Her engagement was a publicity stunt! She is wearing a prosthetic baby bump! She likes children and she wants to have a kid. She preaches celibacy, why would she be having baby when she’s celibate? Did she show you her bump? She is like Beyonce who wore prosthetic baby bump but it fell off.”

According to the Olunloyo, Linda’s pregnancy was a surrogate single woman frozen egg deal. She alleged that Linda loves kids and can buy her way through one. She also said a friend of Laura Ikeji (Linda’s sister) confided in her that Linda cannot have kids.

Olunloyo alleged that Charly Boy confirmed that this afternoon. The activist said he encouraged Linda to just go get pregnant regardless of a husband something that contradicts her preaching to young ladies about celibacy.”

Linda Ikeji Pregnant Before Wedding & Out Of Wedlock At 36, Banana Island Big Girl Disgraces Self
How Charly Boy “Impregnated” Linda Ikeji By Word Of Mouth