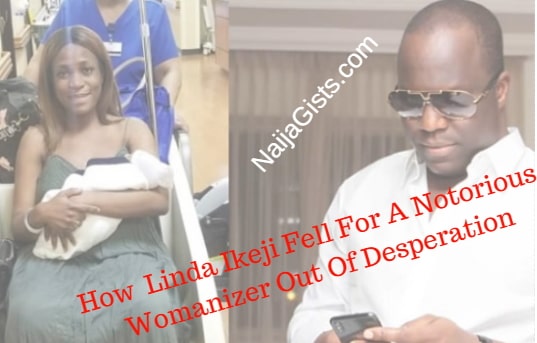 Linda Ikeji Becomes Single Mother As Married Baby Daddy, Sholaye Jeremi Rejected Her Pregnancy… How Family Comes In To Save Her From Shame

Millionaire Blogger Linda Ikeji is not a happy woman at the moment after her alleged baby daddy Sholaye Jeremi rejected her even after delivering his baby via a surrogate mother.

To save the blogger from shame, we learnt close family sources have been begging the Banana Island big boy to accept the blogger now that she is a mother.

According to fillers, Sholaye who many calls Otedola and Dangote’s errand boy is an Itsekiri man from Sapele Delta state.

He is the one funding the expensive lifestyle of Linda Ikeji and the one who leased the Banana Island mansion for her.

To cut the long story short, the issue at hand is that the 43-year-old blogger (not 38 as she is claiming) is very desperate to have a child but Jeremi who reportedly has a wife and children abroad and other baby mamas across the world is not ready for commitment.

This we learnt was the reason Jeremi refused to associate with the blogger or follow her to the United States to bring home her baby.

Sources claim that family sources have been persuading Jeremi to consider Linda and marry her now that she is one of his baby mamas.

The problem here is that another woman is pregnant for Jeremi as we speak so the guy is in a dilemma.

The outcome of a new round of family intervention is still pending according to insiders but the first time Jeremi was approached by Linda’s father, we learnt he rejected all his pleas to marry his daughter.

Kemi Olunloyo, a top critic of Linda Ikeji is still insisting that she used a surrogate mother for her son, Jayce Jeremi.