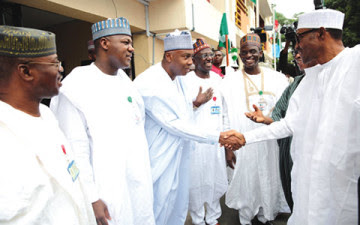 The exclusive list of 22 APC senators from the North working together with the opposition party, PDP to make things hard for Buhari has been revealed.

The Northern APC senators are allegedly working with 46 PDP senators in the Red Chamber to pass a confidence vote in the leadership of the Senate under Dr. Bukola Saraki and Ike Ekweremadu, a PDP senator.

35 APC senators were among the 81 who purportedly endorsed the vote of confidence in the principal officers of the Senate.

The senators have been accused of working against the party on which platform they were got elected into the National Assembly.

The leadership of the Senate has been working against the position of the ruling party since inception.

It disregarded the APC’s advice that those who were shut out on May 29 be accommodated as principal officers for peace to reign.