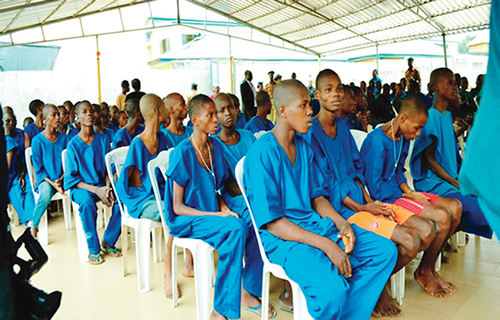 October 5, 2017 – A Look Inside Nigerian Prison Where Underage Children Starve To Death

Life inside a Nigerian prison is not pleasant; you would probably create images describing a den of thieves, murderers, rapists, armed robbers, kidnappers and all sort of unimaginable hardened criminals. But never would those images or pictures include a photo of a child or a teenager among the incarcerated outlaws.

It is, however, bizarre that in the 21st Century there exists a prison in Lagos, Nigeria, which breeds horror for children and dashes their hope, though serving as a correctional facility.

This is the synopsis of children between the ages 12 and 17, lurked with fear in their faces and hunger in the belly but ‘caged’ with hardened criminals at the Badagry, Ikoyi and Kirikiri prisons in Lagos.

For instance, located at the beach front of the historic and ancient Badagry town, is the 132-year-old Badagry Prisons.

It was established in 1885 to house convicted and awaiting trial inmates. But sadly, 85 per cent of inmates currently inhabiting the prison are children aged 12 or 13.

No fewer than 3,000 underage children are scattered across Lagos prisons many of who were hauled into prison by the police in the guise of ridding the state of hawking.

These children are kept in prison for sundry offences such as hawking and crossing the highways.

This has, no doubt, violated their rights as encapsulated by 54-point Article of the United Nations (UN) Convention on the Rights of the Child.

The UN Article which was adopted and opened for signature, ratification and accession by the General Assembly resolution 44/25 of 20 November 1989 came into effect on September 2, 1990.

Although it is observed around the world that children languish behind bars sometimes for protracted periods, in many cases, they face brutal and inhumane conditions.

Lack of record-keeping and a wide array of institutions mean that the number of children held worldwide in such environments is not known.

The United Nations Children’s Fund (UNICEF) estimated that more than one million children are behind bars around the world.

Many are held in decrepit, abusive, and demeaning conditions, deprived of education, access to meaningful activities, and regular contact with the outside world.

Many of these children and adults who were convicted of crimes committed when they were children have received excessive or disproportionate sentences that violate international law, which requires that imprisonment of children be in “conformity with the law and shall be used only as a measure of last resort and for the shortest appropriate period of time”.

Others are held for acts that should not be crimes at all, such as skipping school, running away from home, having consensual sex, and seeking or having an abortion. Some have never been tried for their alleged crimes; others are tried as if they were adults and, when convicted, sent to serve time in adult prisons.

Migrant children are also routinely held in immigration detention, contrary to international standards. Children with disabilities and others may be institutionalised in the guise of protection.

A UN study expected to be finalised in 2017 promises to put international focus on the detention of children and hopefully result in more systematic monitoring of abusive practices, increased compliance with international standards, and a dramatic reduction in the number of children deprived of their liberty.

But governments need not wait for this report; they can and should act now to establish genuine alternatives to detention and ensure that those children who must be detained are held in humane conditions and benefit from schooling, health services, recreational opportunities, and contact with the outside world.

In Lagos, Nigeria, the United Nations Children’s Fund (UNICEF)’s Child Justice Consultant, Dr Wilfred Mamah, had raised the alarm on the plights of children detained and languishing in different prisons across the country.

He said: “We have been working with the Lagos State government in the protection of the Rights of the Children.

“There are currently many children languishing in many Lagos State prisons as well as in other prisons across Nigeria.

“We have, therefore, come up with a Community Rehabilitation Programme with Grace Springs Rehabilitation Home, to gainfully engage these children and ensure that other children are not sent to prison unnecessarily.

“We need to know that no child is born a failure or an offender but should be corrected and shown love always. We are aware that a number of children are still in prison. Were it not for the intervention of the Chief Judge of Lagos State, who recently released about 80 children from the Badagry Prisons, those children would still have been languishing there.”

Mamah’s fears were confirmed on August 2 when the former Chief Judge of Lagos, Justice Funmilayo Atilade, was shocked at the number of underage children detained in Lagos prisons.

Also, Lagos Chief Social Welfare Officer, Mr. Yakubu Jubril, said that many of the children in Lagos prisons were being wrongly held as his ministry had come to realise that some of the children in different prisons across Lagos State were not supposed to be there.

He said: “We have realised that children who are not supposed to be in prison are there today. We have found out that some of these children did not actually commit the offences levelled against them. Some were unduly raided by the Task Force.’’

However, Justice Atilade visited the Badagry Prisons on the sole aim of granting amnesty to 28 underage inmates, but was confronted with an alarming outburst of over a 100 weary and pale looking children, suffering from severe malnutrition and diverse contagious diseases.

Detained among convicted murderers, rapist, kidnappers and all sorts, in the dark stinking cells of the prison, are the underage children, who were starved of freedom and serving sentences for various offences bothering on aimless wandering, hawking and petty theft.

Although Atilade’s intervention was propelled by a social worker, Mrs. Dupe Olubanwo, who had filed a report to the office of the CJ on the alarming number of children, age ranging from 12 to17, held in the prison, the children’s haggard appearances were in stark contrast to the neat and robust appearances of the prison warders who lined up to welcome the then CJ in well-ironed uniforms.

These children, who were clad in oversized blue and green prison uniforms, were ordered to seat on wooden benches in the prison chapel, while hoping for freedom.

Most of the children could easily be mistaken for corpses if accidentally laid beside one, because they appeared as skeletons whose flesh had been shrivelled up for lack of food.

It was a pathetic sight because these children were left at the mercy of the diseases that had eating up their flesh. Some of them had untreated wounds, chicken pox, small pox, body rashes from severe cases of scabies.