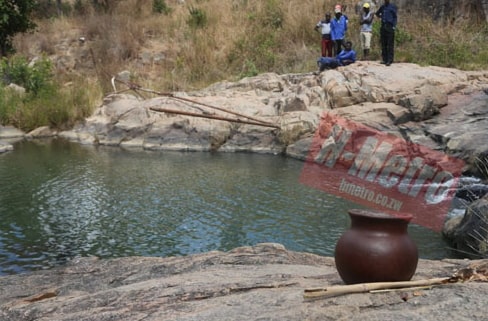 Two Zimbabweans who lost their dear lives on New Year’s day were drowned by Mermaid according to their family.

According to H-Metro, unclad bodies of the lovers where later retrieved by police divers.

The clothes of the lovers were found on the edge of the dam placed on stones.

There has not been any update on what transpired, with some believing that the man drowned after attempting to save his lover from drowning.

Charmaine’s uncle Silvester Lafoti gave a different side of the story, saying that the family suspected that the two were taken by a mermaid believed to be in the dam.

”We have lost a girl who was so brilliant and was supposed to do her Upper Six this year, We are not sure of what actually happened, but from what we gathered from the people who were celebrating New Year at the place, we are convinced that the two were taken by a mermaid,” said Lafoti.

It was reported that a beer bottle was spotted floating on top of the water was seen before they drowned, raising the belief that a mermaid took them.

The family which was still in shock were adamant that the two had been taken by mermaid following findings that Charmaine’s body was found without her eyes, but fish mongers dismissed the suggestions saying fish could have feasted on the body.