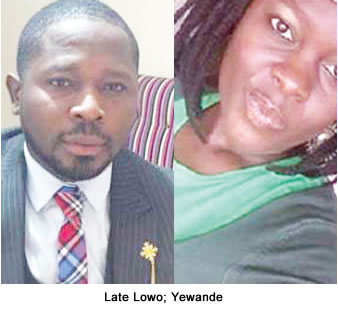 May 25, 2017 – Oyelowo Oyediran May Never Get Justice As Court Postpones Yewande Oyediran Fatoki’s Trial For The 4th Time

The above quote by late English writer and poet, Walter Savage Landor is about to come true for Lowo Oyediran, an innocent France-based man murdered by his wife in Akobo area of Ibadan on Tuesday the 2nd of February 2016.

Since his killer Yewande Oyediran entered a “not guilty” plea on a 1-count of charge murder she is facing, the trial of the female lawyer whose family members have strong connections within the Oyo state Ministry of Justice has been on countless postponements.

On Wednesday, the case was postponed for the 4th time when The Chief Judge of Oyo State, Munta Abimbola who is supposed to preside over the murder case travelled out of state for an official assignment.

The trial has been postponed again till the 5th of June 2017 for continuation of hearing.

It is sad that Lowo Oyediran came from a family with no connections in the Oyo State Ministry of Justice, this is why justice is being delayed in his case.

Let’s hope Human Right activists will come to his defense .

Femi Falana To Fayose: You Are Not Qualified For Reelection, No Court Can Extend Your Tenure
Photos & Videos: Ramsey Nouah Tours Canada, Actor Meets Fans In Montreal, Calgary & Edmonton