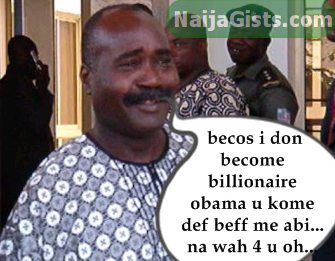 Mr Lucky Igbinedion, the former Edo State Governor has been banned from visiting the United States of America. naijagists.com

According Sahara sources in Washington, DC, American consulate wrote a letter to Lucky Igbinedion to inform him he’s no longer allowed to enter the US.

Lucky Igbinedion who is currently in the midst of corruption scandal in Nigeria after he acquired over 50 Million dollars mansion in Abuja and several other illegally acquired properties all over the country during his tenure in office has been sent a letter revoking his multiple US visas.

A Sahara reporter source in Washington, DC also revealed that the United States Government is currently reviewing the files of top Nigerian officials.

They will be denied visa if they are deemed undesirable on account of their engagement in corruption. – the source said.

In March of last year, EFCC Sealed off Lucky Igbinedion’s multi-million naira mansion in Abuja and a press release was made available.

Below is press release from EFCC:

“The properties are spread over Benin, Lagos, Abuja and London .The exercise which began in Abuja today March 8, 2011 is expected to cover those in other cities in the coming days.

“The EFCC team comprising operatives from the Assets Forfeiture Unit of the Commission, met with occupants of the two properties located in the Asokoro and Maitama districts of Abuja.

“At the Asokoro mansion, Mr. Joshua Abongeriouyi and Felix Bassey, who identified themselves as cook and security man to the ex-governor confirmed that the property is owned by the former governor.

“The two aides along with a young lady who refused to identify herself but simply said she was a cousin to the ex-governor however refused to receive the court order from the EFCC team.

“At the Danube Street property in Maitama, the only occupant who refused to reveal his name told the EFCC team that he did not know the owner of the property.

Justice Idris, had, after considering an ex-parte application by a counsel to the EFCC, Mr. Rotimi Jacobs, granted the forfeiture order which now authorises the EFCC to seize the properties.

Are these politicians taking all these properties to heaven or what?