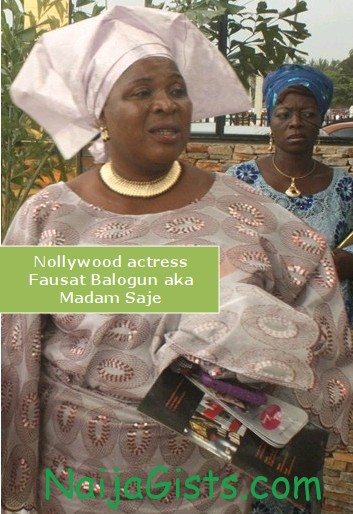 Talented Nollywood actress, Fausat Balogun aka Madam Saje who recently shared with us a rare motherly advice in this recent interview with Yemisi Adeniran revealed some never before heard story of her life. naijagists.com

In the interview Madam Saje speaks on the rough roads she has passed through in life and the details of her marriage.

You are one of the few actresses whose marriage has remained intact for many years. What’s the secret?

There is no serious secret about it. God is the only one who can keep a marriage or any home. We can only try as a human being. I can only say that God has helped me and nothing more.

Mind you, I am not the only one, we have many others who have been married for decades in the industry and still have their homes intact.

What’s your view about the marriages of many of your colleagues, especially the younger ones, that crashed even before they were begun?

Like I said, those of us whose homes are intact have them kept by God and not by any power of our own.

Those whose marriages got broken, honestly, may not have had it so because of their younger ages. It could definitely for many other reasons.

Mind you, this is not peculiar to us in the industry, it has become a general thing or should I say, a common thing these days. We should just pray for our youth and children as they grow up.

Why did you say so?

There is nothing too big for God to handle and when issues begin to get worrisome, prayer should be the next thing to resort to.

What can anyone do?

What would be your advice to those going into marriage?

As a human being and an elderly woman in marriage, I will advise them to be sure they are really ready for marriage before going into it. This is very important. We all want to get married at some point in life. And for women, the society, in a way, has an age bracket within which you must get married.

As you are drawing nearer, the anxiety rises and as soon as you cross over that margin, you begin to consider yourself a failure. Many, because of this have allowed themselves to be pushed or forced into the arms of wrong spouses and that ruins their marriages.

Again, others look at the lives of their friends and ended up choosing wrongly. It is not good to copy others. Couples should endeavour to be mature enough before getting married, they must be convinced that their spouses are just what they want and they must realise that marriage is not a bed of roses.

Many married people today have their tales of woes but because they are enduring, they have lasted this far. They must be ready to overlook the faults of their partners knowing well that they are not perfect themselves. Good understanding of the peculiarities of a spouse’s job is another factor to be considered carefully. In short, marriage is an institution for adults and the mature.

How do you determine a mature person?

A mature person is he or she who can overlook the other person’s faults and get on with life. He is the one who can make excuses for another person’s mistake. It is not about age, stature or life achievements, it is about growing up more emotionally than any other.

How did you meet your husband and what attracted you to him? I met him in the industry; he was my boss and remained my boss anyday. I am attracted to him for his diligence, honesty and straight forwardness. He is a very caring husband and father. His name is Rafiu Balogun, a script writer, director and actor.

How did you come by the name, Madam Saje, which everybody knows you by?

I got if from one of Baba Suwe’s flicks. It’s a name for a woman who acts as an Iron Lady.

How would you describe your journey so far in the movies’ world? I would say so far, God has been good to me. I started with them at the time of stage play and now we are in the world of movies.

Are you saying your parents were not in support of your career choice?

No, they were not, especially my father. You know that until recently, parents believe acting was for unserious people. They didn’t expect their children to be involved in it when there are better professions like Medicine, Nursing, Teaching and several others available to be chosen from. They believed it was only wayward girls that were into acting and for me, my father didn’t find it funny at all.

He did not take it easy with me. He beat me and even went to the extent of stripping me naked just to discourage me. I was not discouraged despite all. It only pained and embarrassed me.

But I waxed stronger in my love for it and I thank God that I have made a big success of it. My only regret is that my father is not alive today to witness how well I’m doing on the job. I can’t blame him for his actions then,. He was only play the role of a good parent the way he could.

What about your mother?

She is also late but she gave me her support. You know women; they have a way of understanding their children and seeing from their views. But there is little or nothing she could do to convince her husband otherwise she would be seen as indulging me. My father was a disciplinarian and he did not hide it.

Would you want your kids to step into your shoes?

I have two of them in the industry already. They are doing well and I am happy about that.

Was there a time you were oppressed or harassed by any of your superiors in the industry? It is normal to have all manner of experiences but I have never been harassed by anyone. May be because of my husband’s status or because of my own carriage. People go out of their ways to do good to me, to honour me and I thank God for that.

What message do you have for women and upcoming artistes?

Women should love God and care for their homes. They should make their homes top of their priorities and pray all the time. They should avoid their husbands’ dislikes too. For upcoming artistes, they should be focused on the job, be ready to pay their dues and wait for their turn to shine. (nationalmirror interview)