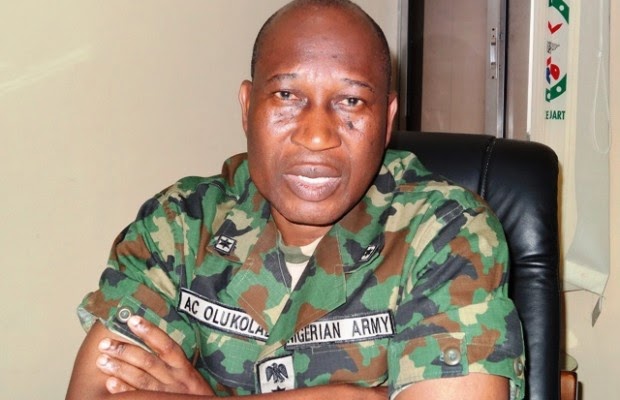 @GENOlukolade: What Nation? What Pride?

“I would always rather be happy than dignified.” ― Charlotte Brontë, Jane Eyre

Major General Olukolade speaks about ‘nation’ and ‘pride.’ The question is; ‘what nation?’ and ‘what pride?’ Having had a sizeable piece of Nigeria ruled by Boko Haram with former Nigerians as we sadly must refer to them, being subjected to new harsh laws and realities under a Boko Haram government in a Boko Haram nation; local governments like Gamboru-Ngala, Dikwa, Abadam, Marte, Bama, Madagali, Gulak and Gwoza that remain Boko Haram territory; what nation is Major General Olukolade talking about? And what pride can we possibly have? Will it be fair to regard us as a nation and one that has pride left if we had an ounce of empathy for the enslaved former Nigerians in these parts; the dead, the dying, the raped and forcefully conscripted? Can we ever possibly still talk of pride when our military has lost our men, women and territory to terrorists?

Respect is earned: Has Major General Olukolade considered the apologies due to Nigeria? When will the DHQ apologize for falsely claiming that they, Nigerian military had bravely rescued all but 8 of the abducted girls—mind you, the very military that failed to actually pursue the terrorists with their captives, but stood back as mere citizens followed the terrorists and our daughters deep into Sambisa? Does the Major General not think that if the Nigerian military apologized for its insensitive lies, perhaps the media will be more kind to them?

Does the General not believe that a taller apology is due from his department and his paymaster, President Goodluck Ebele Jonathan for treacherously declaring a cessation of fire against Boko Haram; a move that deliberately allowed the terrorists annex much more of Nigeria including the entire northern half of Adamawa and kill thousands more of our dear Nigerian citizens. Is it fair to plead more kindness from the media when the DHQ is yet to formally declare the Cessation of fire a blunder and officially cancel this scam and officially announce to the world that the war and #VictoryForNigeria is back on in full force against the terrorists and Nigeria will no longer traded to stupidity?

Will the Major General rather prefer that the media turns a blind eye to these top level senseless and clueless tactics and decisions and refuses to harshly rebuke those responsible for them who yet idiotically refuse to apologize for such treasonable choices? What will be the use of such a media as fails to report on the disastrous plight of its people as their territory is sold to terrorists piece by piece and State by State?

Does major General Olukolade consider apologizing for the military under the leadership of General Azubuike Ihejirika and now under Air Chief Alex Badeh, transferring hardware to terrorists systematically and continuously without a single soldier ever having been court-martialed for this treachery through the entire four years of Ihejirika’s tenure? Does Olukolade see this as defensible or does he deny the direct transfer of armored tanks, APCs and cartons of ammunition and thousands of guns to Boko Haram, that were carted up north by his men for use against terror?

Will a discussion on pride, not be better approachable if the Major called for the military tribunal trying of all those who permitted and were paid billions of dollars to facilitate this deadly treasonable supply of arms and ammunition to terrorists, up to the top level of the military and Presidency; or does Major General Olukolade expect us to be reasonable with this and not to complain as a people and as a media?

And can the media be asked to deliver lenience on the Nigerian military that storms its stands and burns our dailies? I never saw mention of this in the Major General’s presentation. Was the Nigerian military demanding pride and confidence by that act of shameful tyranny? The massacre of Zakzaky’s three children and other procession members; and the burning of Lagos State buses also comes to mind. I do believe military men can err, but where is the apology from its spokesperson? The authentication criteria of the military leadership who control those given the supreme right to bear and use arms must be put through more rigorous certification process. Indeed our soldiers are great men, but the leadership of that department needs be checked. Corruption seems to have destroyed our last bastion of hope in Nigeria.

I dare say, I was stunned the Major General mentioned “Baga.” Did Baga happen or did it not happen? Is the military saying the media should not have reported Baga? Or what exactly is he saying? Did we not see the hundreds of burned homes in Baga in the aerial photos? Are we meant to keep silent when the military kills more and destroys more than the terrorists do? Must pride be protected to our death and with our blood, being killed by our own military? Is this what Major General Olukolade demands of us? In that case, to blazes with the pride. What we want is professionalism. What we want is responsibility. Pride comes to those who deserve it. Nigerians were and are ashamed of the Baga massacre and incendiarism of April 2013. There is nothing to be prideful about in that and nothing for the media to suppress.

So what we now must ask is: is Major General Olukolade all of a sudden a paid PDP publicist? What and why comes this report nineteen days short of the month to the Presidential elections? His report as full not of concessions and admissions of malfunctions of the Nigerian military and government in properly directing a war that could and should well have taken better turns; but in defending the hapless conduct of the current administration in executing the war; going as far as defending the Federal government spending which I believe is not the duty of a Military spokesperson like himself. When did it become the duty of the military PRO to explain that the Jonathan government rather choose how to feed millions than to equip the military for this battle? Can Major General Olukolade substantiate his position to the media with facts and figures? Can the General defend the distribution of billions of dollars worth of Nigerian military base land in Abuja to his defense chiefs and explain how this feeds the people as against supporting the military? Can Major General Olukolade justify the expenditure of over 18 billion dollars so for in the “war against Boko Haram?” Can Major General Olukolade prove to us when and how this government has fed its poor, except when stomach infrastructure is disbursed ahead of elections?

It is scary to have a military that should focus on defining how it is conducting a war against terror, spending its time joining in political bickering. It is pathetic to read the General comparing the crisis within the territory of Nigeria and initially isolated to the confines of a jungle, before it was allowed by military treachery to escape and conquer dozens of local governments, to the ISIS crises as he did, which has been determined by several regional and global players who openly gave these terrorists weapons and territory from where to wage a war against Syria before they turned these arms and territory against Iraq. To even dare to make such comparison with intention to bamboozle and blind the people of Nigeria and global recipients of his lecture is an offense that should otherwise be treasonable.

No insurgency should ever be possible to arise within a state and to escalate to the proportions Boko Haram has if there is a figment of a military in that nation. As Abacha is quoted to have said, there is no insurgency that lasts more than 24 hours, but the government has a hand in it.

Without threatening him, the Major General’s days as a military officer are getting quite numbered. Perhaps soon he will be the writer that he was cut out to be; and a part of the media and media only. Perhaps then we will see the best of him; because he has failed to impartially represent Nigeria through its military as a serviceman to the State but first to the people.

The Nigerian military should either do its job, or step aside and allow the brave Nigerian citizens who have demonstrated capacity and patriotism; to do it for us. It is time the military seizes to be a tool utilized for politics, terror and torture, but returns to be that proud force that General Muhammadu Buhari lead to recapture Nigeria’s 19 Islands from the Habre Chadian forces; that proud and skilled force that led ECOMOG to restore peace to Liberia.

Today the Nigerian military is a force only and most efficiently capable of surrounding and protecting Ali Modu Sheriff when he makes his PDP party political pilgrimages through the roads of Borno. And this is the truth that Olukolade must contend with.