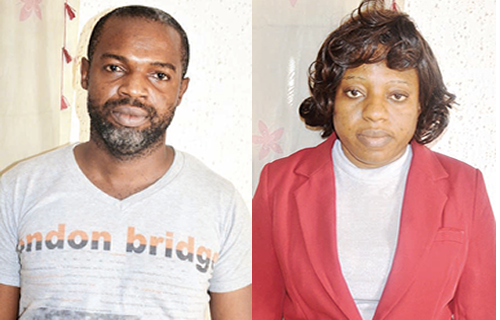 A Nigerian lady attempting to smuggle drug in a bag of noodles from Lagos to Malaysia has been arrested.

The suspect identified as Gloria Ezeabata was arrested during the inward screening of passengers on an Ethiopian airline at the departure hall.

Ezeabata, who works with an accounting firm in Lagos, admitted having a Facebook relationship that got her involved in drug trafficking.

She said: “I met a man on Facebook some months ago who lives in Malaysia. He told me while chatting online that he is from my state, Anambra in South-East, Nigeria. After some months, he proposed marriage and I told him to come to Nigeria to meet my parents as our custom demands. He promised to fulfill every marriage rite. “Months later, he invited me to Malaysia, promising to pay all the travel expenses. After several appeals, I decided to visit him.

The day I was to travel, he told me to take along a bag of foodstuff sent by his mother from the village. I was given the bag at the airport but in the process of checking it in, drug was discovered inside packs of noodles in the bag and I was arrested.”

Substances that tested positive for methamphetamine weighing 1.325kg were detected in her luggage. It was concealed in 26 packs of noodles

“I’m a transporter. My friend in Malaysia asked me to prepare travel documents for Gloria. He also asked me to give a bag to Gloria to take to Malaysia.”

Both suspects are still in NDLEA custody.

Rat On A Plane: Air India Makes Emergency Landing After A Rat Was Spotted On Board
Photo Of Eiye Confraternity Cult Members Arrested On Christmas Day In Ogun State