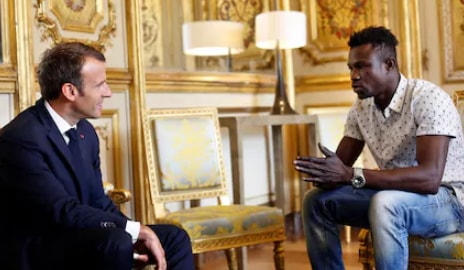 I grew up being fascinated by the spiderman animated series and I can never forget how those lyrics that formed my early childhood:

Does whatever a spider can

Spins a web, any size,

The part of the lyric that actually fascinates me the most is the one that says that he always arrive on time. I love this Marvel creation because he was always on time, he was good and he was fast! The most elusive part is that unknown to many who taught he came from another world, he was just a next door neighbor! On the 26th of May, 2018, the whole world was prepared for the battle of titans between Real Madrid and Liverpool. The much awaited UEFA Champions League final overshadowed all other activities of the day as many football fans stayed glued to their T.V set for the grand finale, but far away in Paris, France, a young man was about to put the Guinness book of Records to the test. By now, Peter Parker of the Marvel’s Spiderman series should be green with envy as this young Malian migrant has just given a true life version of him!

The story of Mamoudou Gassama, the 22-year-old  Malian migrant who climbed up five floors(four storeys), from balcony to balcony in less than thirty seconds to save  a four year old toddler dangling from a balcony has gone viral. The French President Emmanuel Macron suspended all protocols and official meetings to meet the courageous Gassama at the Elysee Palace in Paris.  The President assured that he will be made an honorary citizen and all his papers will be regularized. There are many things to learn from this young man’s story:

THE WORLD WILL JUDGE YOU BY YOUR ACTION AND NOT YOUR INTENTION:

Khalil Gibran said, “The smallest act of kindness is worth more than the greatest intention”. The world is changed by your example, not by your opinion. As I watched the video of Gassama rescuing the toddler, I realized that there were also many observers with good intentions but not requisite action. As Gassama was brought in to meet the French President at the Elysee Palace in Paris, I observed that none of those observers with good intentions came along with him! What will place you ahead of others is not your intention but your action. Everybody knows the man that took the first step on the moon (Neil Armstrong) but I can bet that no one remembered those that went to the moon with him on the Apollo II mission. Neil Armstrong was not the first man on the moon, he only took the first step! He was actually there with two colleagues from NASA– Edwin Eugene Aldrin and Michael Allen Collins- but the world only made reference to him because he took the first step. What actions are you taking today for the world to remember you tomorrow? Neil Armstrong gave what is today known as the greatest quote of the 20th century when he said, “One small step of a man. One giant leap for mankind”.

THERE IS A HERO IN EVERYONE: I have always believed that everyone can be a hero. You are created to be someone’s hero; we all have an inner hero. If stirred to action, that inner hero is capable of performing tremendous goodness for others.  The key to heroism is a concern for other people in need—a concern to defend a moral cause, knowing there is a personal risk, done without expectation of reward. Gassama was the toddler’s hero on the fateful day.

YOU WERE CREATED TO LEAVE AN IMPACT: You’ve got to discover the one thing you were created to be, and be willing to pay the price to be it. Man is created for impact, and our life has meaning to the extent that it has influenced and impacted others.

George Washington Carver said, “No individual has any right to come into the world and go out of it without leaving behind him distinct and legitimate reasons for having passed through it”. Gassama might not have made a great impact in the world presently but to the toddler, he made maximum impact! Make your impact count in someone’s life.

JUSTIFY YOUR EXISTENCE: Henry David Thoreau once said, “When it is time to die, let us not discover that we have never lived”. I challenge you to measure your life by its donation, not duration! Are you just a ‘matter’ (something that has weight and occupies space) or you are someone that matters (a person of great influence)? The former U.S President, Jimmy Carter captured this succinctly when he said, “I have one life and one chance to make it count for something… My faith demands that I do whatever I can, wherever I am, whenever I can, for as long as I can with whatever I have to try to make a difference.” Make your presence count!

WE ARE ALL ON A RESCUE MISSION: I have come to realize in life that people without a mission ultimately become an omission! You must live your life like a man on a mission. Your own life mission might be to help youths overcome addiction, or help people salvage their relationship as a relationship coach. Whatever you do, always remember that you are on a rescue mission.

SUCCESS IS BEING IN THE RIGHT PLACE AT THE RIGHT TIME: The greatest tragedy of life is for a man to miss his time. This nexus between time and place is what the former Prime Minister of Great Britain, Winston Churchill calls the ‘Finest Moment’. Churchill once says, “To each there comes in their lifetime a special moment when they are figuratively tapped on the shoulder and offered the chance to do a very special thing, unique to them and fitted to their talents. What a tragedy if that moment finds them unprepared or unqualified for that which could have been their finest hour.”

WHEN OPPORTUNITY COMES, IT IS TOO LATE TO PREPARE: Benjamin Disraeli said, “The greatest secret of success in life is for a man to be ready when his opportunity comes”. The pertinent question in life is not whether opportunities will come, it is to ask ourselves whether we are prepared. The sure way to miss success is to miss opportunity; nothing is so often irretrievably missed as a daily opportunity. Great opportunities come to all, but many do not know that they have met them! The only things that are truly ours in life are the opportunities that we seize. While many on lookers saw the toddler hanging on the balcony as a viewing site, someone else saw it as an opportunity to make impact. Look around you my dear, your big opportunity may be right where you are now! The ancient Roman philosopher, Seneca said, “Luck is what happens when preparation meets opportunity”.

YOUR TREASURE IS WHERE YOUR HEART IS: The Bible says, “For where your treasure is, there will your heart be also.” When asked by journalists the reason why he took the audacious step, Gassama was quick to attach his prompt response and solo rescue mission to his deep love for children. I have realized through personal experience that our heart will continually go to places and people that hold our treasure. Where does your heart always go? It may be to orphaned children, widows, youths (like mine!), sexually abused children, the less privileged or physically challenged people. Go where your heart takes you, there lies your treasure.

USE YOUR GIFT AND TALENT: Leo Bascaglia said, “Your talent is God’s gift to you. What you do with it is your gift back to God”. What will showcase you before the world and bring you before important people is your gift. I have often tell my mentees that until they discover and nurture their gifts and talents, they will continue to travel in another man’s journey. You will only shine in your area of gifting. Apart from making him a French Citizen, Macron has offered Gassama an automatic job with the Paris fire brigade where his talent will be greatly needed. It is amazing to know that the French Fire fighters arrived at the scene to find the child had already been rescued! Myles Munroe said, “To know the right places for people, we must know their areas of gifting”.  Mamoudou Gassama would never have imagined stepping his foot at the  Élysée Palace in Paris or being a special guest of the French President but his talent and gift did the magic. The gift of a man just as the Holy Bible says, “Maketh room for him and bringeth him before great men”. Gassama was overwhelmed by photograph shots in front of Elysee palace as he displayed the certificate of courage and dedication signed by Paris Police Prefect Michel Delpuech.

ONE MOMENT CAN CHANGE A LIFE: Buddha once said, “One moment can change a day, one day can change a life and one life can change the world”. Always remember that your whole life can change in a moment. No matter how discouraged you are trying to get the best out of life, still hold on tenaciously to your dreams. Don’t give up and your own moment will come. There are many illegal migrants still living in France and trying to eke out a living, but Gassama seized his own moment. Paulo Coelho said, “Life was always a matter of waiting for the right moment to act”.

IS YOUR CHILD AN ENDANGERED SPECIES?: Well this is also one of the lessons to learn. Many children are in danger for lack of attention from their parents. The father of the child in question was detained overnight for alleged parental neglect, and is to appear in court in September. It is quite interesting to know that he left the child alone to go shopping and playing Pokemon Go! Your own child might not be hanging on in a balcony but may be hanging-on on life. Is your child hanging on addiction? Is your child being sexually abused by close relatives? Is your child struggling with identity crisis? Be there for your children, that is the sole reason why you are called a parent!

Coming back to the Champions League final that Gassama missed, I hope he is a Real Madrid fan as the match ended 3:1 in favour of Real Madrid. Edmund Burke said, “Nobody made a greater mistake than he who did nothing just because he could only do a little”. Many times, the little deeds we lightly esteem are actually what are needed to make the world a better place. You don’t know what you are capable of until you try!

QUOTE OF THE WEEK: “The smallest act of kindness is worth more than the greatest intention”- Khalil Gibran

Continue Reading
You may also like...
Related Topics:column, gbenga adebambo

The Best Revenge Is Massive Success!
At-Risk Youths And The Hope Of A New Beginning