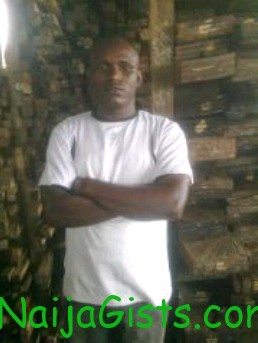 August 27, 2012 – Man Arrested For Attempting To Kidnap His Chinese Boss

The Command’s spokesperson, Mrs Ngozi Braide, a Deputy Superintendent (DSP), who confirmed the arrest, said Chukwu was planning to travel to Canada after collecting the N2million ransom.

The suspect, according to her, was arrested by policemen attached to FESTAC Police Station after the matter was reported by Mr Cheng.

She said Chukwu on August 15, called his boss with an unknown number and threatened to kidnap him if he did not pay the N2m.

“The suspect threatened to kill the Chinese, if he reported to any police station or even try to tell anyone about the threat,” she said.

Cheng, Mrs Braide said, alleged that the suspect told him that he (Chukwu) had been paid N1.5m for the job. The suspect, the Chinese reportedly said, promised to disclose the identity of the person that sent him after collecting the ransom.

Reliving his ordeal, the Chinese said: “I’m from Hong Kong and the Managing Director of Chronotech Nig &Co. Ltd, Amuwo Odofin. On August 15, 2012, at about 12pm, while I was in my office, I received a phone call from an anonymous caller. Around 7:30pm on the same day, the guy called my telephone again and demanded that I should go and pick a mail neatly placed in the factory mail box and read it”.

Cheng said he sent the factory security officer, Mr. Alex, to pick up the letter.

He noted that when he opened the mail, he discovered that it was a threat letter, demanding N2million and warning that if he fails to comply he would be killed.
Cheng said: “I played back CCTV footage to reveal who placed the letter and it turned out to be Chukwu. I reported to the company’s legal department and they advised me to play along.

“On August 16, at about 7am, I received another call from the suspect warning me of the consequences of not carrying out his instructions of paying the N2million and that failure to comply would spell danger.”

The second call, he said, was recorded on his phone as evidence.

Cheng said he pleaded with the suspect to spare his life as he did not have the said amount, but all pleas fell on deaf ears.

The Chinese said he reported the matter to FESTAC Police Division for investigation.

He said the suspect called again on August 17, and told him to bring the money to a particular location.

Cheng said he informed the police before going to the bank at 11am on that day and the Police advised him to put loaves of bread in a bag and conceal it like money and drop it where the suspect had instructed him.

It was when the suspect attempted to take the bag that policemen swooped him.