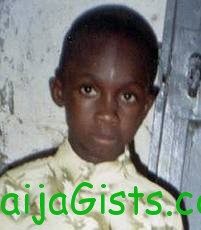 Just yesterday we shared a news of a 2-year old girl who was abducted by her own aunt and sold for N100,000. Another story has developed when a 3 year old boy was allegedly kidnapped in Aba and sold for 200,000 Naira in Onitsha.

Soldiers at the Ngwa High School, Aba Forward Operation Base (FOB) of the 144 Battalion of the Nigerian Army, arrested six persons, including four women and two men, over the kidnap of three-year-old boy at Egbelu Mbutu, near Aba. The six suspects were arrested at different locations in Aba, Abia State; Onitsha, Awka and Nnewi all in Anambra State.

It was confirmed that on June 3, three kidnappers, who rode on a motorbike had at about 8.20 p.m. stormed the home of an elderly woman whose name was given as Onyidiya at Egbelu Mbutu in Isiala Ngwa South Local Government. The gang, led by one Chijioke, aka Adamu, who hailed from Amapu Umuba in Isiala Ngwa North Local Government Area, allegedly broke into the house of the woman where one of them reportedly wrestled her to the ground before the others went into the inner room where the boy, Chimechefulam, was sleeping.

The kidnappers tied the boy with his grandmother’s wrapper before they escaped with him to an unknown destination. Immediately the bandits fled, the grandmother raised the alarm, which attracted people within the vicinity and a search party was promptly formed.

It was in the course of searching for the boy that a villager provided information that he overheard someone telling Adamu in the afternoon of the fateful day that he should remember their business at 8 p.m. Based on the information, the gang leader was traced to their house but could not be found and after investigation by the villagers, it was established that he was the one who led the team and this prompted the matter to be reported to soldiers in Aba.

Leading his men, the officer-in-charge of the Ngwa High School FOB, Captain Chris Nwogu was said to have swung into action. The soldiers traced Adamu to Aba where he was arrested. He allegedly revealed how his gang abducted the boy and took him to a woman in Onitsha. It was also gathered that the woman at Onitsha, in a bid to get a buyer for the boy, transferred him to another woman in Awka, the Anambra State capital and from there, a buyer, a man said to be in his 70s was found at Nnewi.

The boy was finally sold for N200, 000 to the septuagenarian in Nnewi who claimed he was involved in the act because he was childless and needed a boy who he could live with and train. Six persons, including four women so far identified to have played one role or the other in the kidnap and subsequently in the sale of Chimechefulam had been arrested while the boy was rescued last week at Nnewi.

When the army base in Aba was visited, the officer-in-charge was said to be away on official duty, but an army source confirmed the incident, saying the boy had been re-united with his parents while investigation continued.

Parents need to be careful with their children nowadays.

This case of child abduction and kidnap is going out of hand.