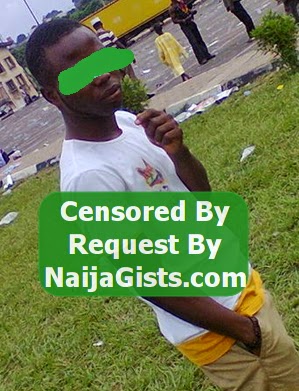 Wonders will never end as we say and it never ended as one Sikirulahi Henry Abdusallam is currently boiling in police net after attempting to cut his lover’s throat this New Year with a blade.

The suspect allegedly took his lover identified as Boluwatife Ajayi to an uncompleted building located at Alhaja Wosilat street in Baruwa area of Lagos Mainland to carry out this nefarious act.

Henry was said to have pinned down the struggling lady in an attempt to slit her throat when nearby residents heard her faint cry and dashed into the building to rescue her.

A witness, one Oluwole Olalekan, who was seated in front of his house when he heard the cry of Boluwatife said the young Sikiru was trying to strangle her so that she would not cry out for help. He decided to trace the voice when he heard the shout egbami o help!

He was the one who called out for help as other neighbors joined the pursuit for Henry who was now fleeing the scene on realizing that neighbor had arrived the scene.

Luckily, they were able to nab him along with some boys residing in the building.

According to Sikiru, his lover had come to ask for 3000 naira for hairdo which he released to her. Though she had offended him by turning down his marriage proposal and he had developed the passion to kill her and himself, he just never knew what got over him.

The young man is cooling off at the Ipaja police station in Lagos while investigations are ongoing.

The victim has been taken to the hospital for treatment.

Nawa oh. Ladies be on the watch.