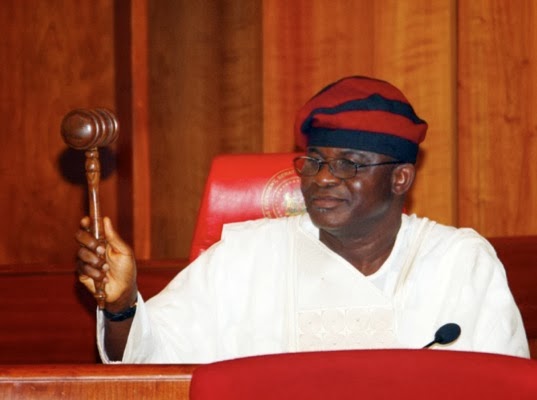 The Economic and Financial Crimes Commission today, February 5, 2014 told an Abuja High Court presided over by Justice S. E Aladedoyinbo how the trio of Emeka Ukor, Anthony Uzonwanne and Babayemi Bukola conspired and forged the signature of the Senate President, Senator David Mark, in an attempt to fraudulently withdraw the sum of N45 million from his bank account.

The accused persons are being prosecuted by the EFCC on a seven count charge bordering on conspiracy and forgery.

At the resumed hearing of the case today, prosecution witness Benedict Agweye who was lead in evidence by counsel to EFCC, Shata Jamila told the court that the FinBank cheque with which the accused persons attempted to pull out money from Senator Mark’s account was forged. Agweye said he came to this conclusion after carrying out series of forensic analyses on the document.

He disclosed that on receipt of the forged FinBank (now FCMB) cheque and the specimen of the genuine cheque, he commenced detailed analysis, including simulation of the signatures to be able to identify the existing characteristics in the disputed signature and the signature of the original owner of the bank account. Secondly, he said a stereomicroscopic analysis was conducted on the documents in order to identify all of the microscopic characteristics in the signatures not normally observable with the naked eye.

He went further to tell the court that a spectral analysis was also carried out on the documents using the foster and freeman VSC 5000. This, according to him, was done to enable side-by-side comparison of the documents under magnification and to also identify areas of obliteration and alteration in the disputed FinBank cheque and the known specimen.

The case has been adjourned to March 10, 2014 for continuation of hearing.
Emeka, Anthony and Babayemi were arrested sequel to a complaint from the Senate President that the accused persons conspired and forged a cheque leaflet allegedly belonging to FinBank dated August 28, 2009 in an attempt to fraudulently withdraw the sum of N45m (forty five million naira) from his account.

Count two of the charge reads, “That you Emeka Ukor, Anthony Uzonwanne and Babayemi Bukola, on or about the 5th October, 2009 within the jurisdiction of the High Court of the Federal Capital Territory fraudulently moved a FinBank of Nigeria Plc cheque No. 00684074 dated 28th August, 2009 drawn in favour of Aeromagnetic Fishers Limited on the account of Honourable Brigadier General David Mark (rtd) in the sum of N45,000,000.00 (Forty Five Million Naira) with the intention of taking the said cheque dishonestly out of possession of the said Honourable Brigadier General David Mark (rtd), and thereby committed an offence contrary to section 286 (1) of the Penal Code Act cap.532 Laws of the Federation of Nigeria (Abuja) 1990 and punishable under section 287 of the same Act”.