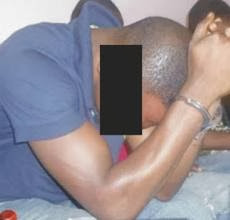 Segun Majeed a 35-year-old man is cooling off in prison after he alleged raped, a 9-year-old Primary school pupil in Iwo Road Ibadan.

According to the prosecutor, Mrs Olumide Ojo, the alleged rape happened at Army Barracks Primary School on Iwo Road.

The prosecutor told the court that she was yet to respond to the application filed by defence counsel, Mr. Olaniji Olabinjo.

Ojo said she had just been served, that the court should give her time to respond.

The Presiding judge Mashud Abas ordered that the defendant be taken back to prison.

The case is set for hearing today in the capital city of Oyo State.