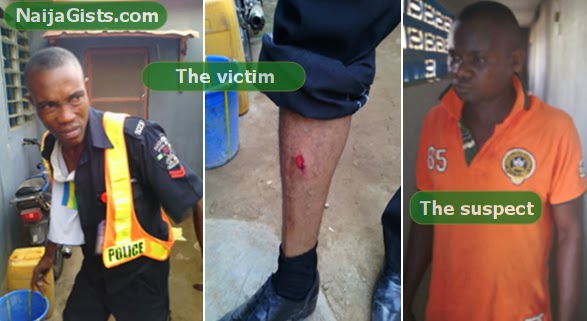 A Nigerian police corporal will never forget Tuesday the 4th of February 2014 after he was badly beaten by a angry man while directing traffic.

The drama unfolded at the popular Cele Bus Stop in Shasha area of Lagos state Nigeria.

The suspect, a 30-year-old man by the name of Chinwendu Iwechukwu from Imo state beat the officer in question to stupor and later tore his uniform.

It happened around 8 am on Tuesday when the police corporal identified as Onofe Emmanuel was sent from Shasha police station to control traffic caused by a truck parked by the roadside along Shasha Road.

On getting there, Corporal Onofe tried to control the traffic by asking the drivers who drove against traffic to reverse and join other vehicles on the right lane so as to pave way for oncoming vehicles to pass.

The unidentified driver was reported to have started an argument with the corporal and attempted to hit him with the car if he refused to get off his way.

During the argument, an eyewitness said the suspect, Chinwendu who was given a lift by the driver came out of the car and started beating the police officer.

“The police simply asked them to reverse so that the road can be cleared for oncoming vehicles to pass and everybody would go their way, but the driver started using his car to push the police officer. After he parked, Chikwendu started shouting: ‘where is the policeman? Let him come and fight if he has power.’ Tomorrow we will say policemen are wicked. Simple instruction, we can’t obey,” the eyewitness said.

According to the policeman: “I was sent to control heavy traffic caused by a truck that was parked along the road. When I got there, the road was blocked because drivers were driving against traffic. I asked them to reverse but one of the drivers raised an argument. He then parked his car and the suspect came out and started beating me up and tore my uniform.”

The driver that started the argument reportedly fled the scene while Chinwendu the muscle man was arrested and taken to Shasha Police Divisional Headquarters, Afonka.

The Divisional Police Officer, DPO in charge of the station said Chinwendu would be charged to court immediately for assaulting a police officer.