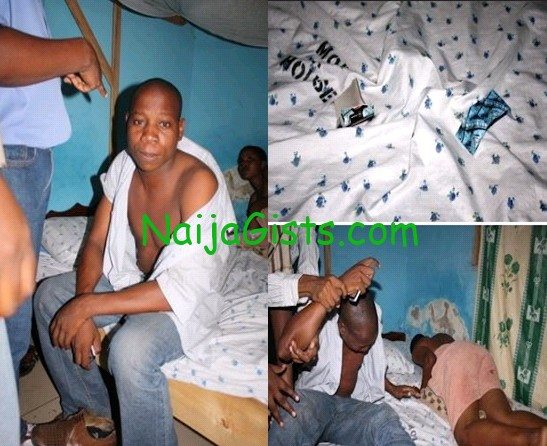 A user sent us some of these pictures yesterday however, we decided to carry out proper investigation before publishing it. naijagists.com

According to our investigation, the young man above identified as Mr Ahmed was caught on an hotel bed with his best friend’s wife in Lagos.

The wife who has been a usual suspect of adultery by her husband was caught on the same bed with Mr Ahmed few hours back.

The husband of the woman pictured above trailed the two to their hotel room, and made sure he heard the bed cringing before raising alarm and forced the door open.

By the time the door was opened, the man had managed to put on his trouser and shirt while the woman could only manage to cover her nakedness with a bathroom towel.

As he opened the door, we learnt paparazzi rushed to the scene snapping pictures with their phones and sending it to friends on Facebook and other social networks.

The hotel management quickly called police to the scene to disperse the folks who planned to take the law into their hands.

Mr Ahmed later denied any wrongdoings. He claimed the woman didn’t raise any alarm of rape because they had mutual agreement.

The adulteress on the other hand was so shocked and became dumb because of her unholy acts.