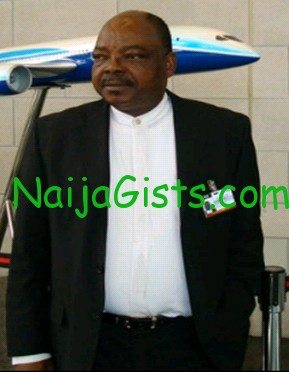 According to reports, some suspected assassins stormed his residence at 1, Agbaifo Street, around 9pm on Tuesday night.

The gunmen reportedly gained entranced into his palatial residence when they trailed his driver called Seye into the gate and entered the compound with him.

We learnt the gunmen ordered his driver to come down and pointed gun at his head. They then ordered him to take them to his boss’ sitting room.

When the assassins saw Agbon ifo, they pumped several bullets into his body, waited until he died before they left the house.

Neighbours who rushed to the scene immediately after the shooting noticed that the assailants did not remove any item from the house. They concluded that the gunmen were hired assassins who targeted him for elimination.

As at the time of this report, his corpse has been deposited at the Ikeja General Hospital’s mortuary for autopsy.

Agboifo’s neighbours and relatives were seen discussing the incident. They expressed shock at the way the ex-police chief was murdered.

Efforts to speak with the deceased’s children proved abortive as the eldest child said he was still in shock and could not grant an interview for now.

Policemen from Area ‘M’ Command, Idimu were deployed to the home of the slain former police chief.