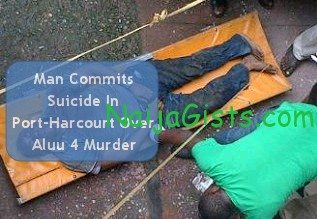 A young man whose identity is yet to be released has committed suicide in Port-Harcourt, Rivers State, Nigeria. naijagists.com

According to a witness, the man who works at Federal Secretariat Complex in Port Harcourt has earlier made his frustration known on the brutal killing of four innocent students by Aluu villagers.

The witness was surprised when he heard the man has jumped from the 8th floor of the building to the ground.

As at the time of this report, details are still sketchy.

Stay in touch with NaijaGists.com for update on this developing news.