Posted on November 8, 2015 by Naija Gists Leave a comment 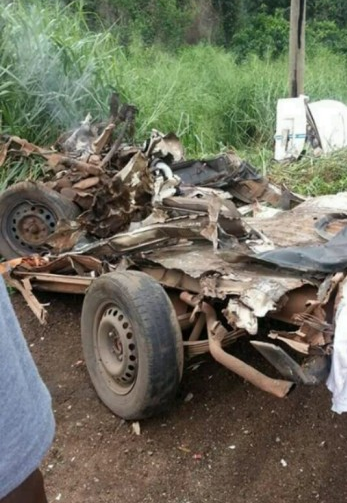 Nov 8, 2015 – Man Crushed To Death By Seven Up Truck In Fatal Accident On Benin Lagos Expressway

A middle-aged man simply identified as Iyare, was on Sunday morning crushed to death when his Mercedes Benz wagon car in which he was traveling, rammed into a stationary truck belonging to Seven-Up Bottling Company, along the Benin-Lagos expressway.

The victim who was said to be coming from the Lagos end of the road, apparently lost control of the car and ran into the rear of the articulated truck parked on a grass verge opposite the company premises where the fatal accident occurred.

He was rushed to the University of Benin Teaching Hospital (UBTH), Ugbowo, where he was confirmed dead.
One of the eyewitnesses who spoke to journalists on condition of anonymity, said the victim may have been under a hot pursuit by customs officials, because, according to him, the Mercedez Benz C class station wagon car had no number plates and looked quite new.

“It looked like the vehicle was coming from Lagos and was being chased by customs officials before it suddenly crashed into the truck. But the truck was not moving before the collision occurred,” he said.

Following the incident, some angry youths set five of the trucks ablaze, blaming the accident on the parking of the company’s vehicles on both sides of the road

A timely police intervention was said to have prevented them from storming the premises of Seven-Up Company, just as the presence of policemen and operatives of the Federal Road Safety Corps at the scene to ensure a free flow of traffic.

According to a senior police officer, who did not want his name mentioned, said no sooner had the driver been taken to UBTH than the youths, suspected to be hoodlums, began setting the trucks on fire.

“As they (youths) brought him out ‎and discovered that he was dead, some took him to hospital. And the next thing was that they besieged the company and set its properties on fire. It took our intervention to prevent them from entering into the factory,”‎ he said.

The Toll Gate Unit Commander of the FRSC, Mr. Ameen Adewale, who further confirmed the incident, said the remains of the driver had been deposited in the mortuary, while efforts were being made to remove the damaged vehicle.

“We got a distress call at some minutes past nine, this (Sunday) morning, that a Mercedes Benz ran under a well parked truck in front of Seven-Up. We have removed the dead body.
“What we are doing now is to ensure traffic control; to make sure that nobody is trapped,” Adewale said.

A source at the Seven-Up company said the management was still assessing the incident and the extent of damage done to its property.
“As we speak, nobody has been held accountable. But with time, we will find out what actually happened,” the source added.