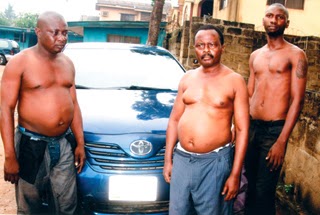 Azeez was arrested with two alleged accomplices by the police at Oko Oba Division under Area ‘G’ Command, Lagos State, southwest Nigeria, after the missing victims was traced to him during investigation.

It was alleged that the suspect offered N9 million bribe to the police to persuade them not to proceed with the investigation but it was turned down by the officers in charge of the investigation.

During interrogation, Azeez allegedly confessed to the police that he deceived the customs officer that he was a spiritualist and told her that her family members were after her properties.

The suspect allegedly told her to bring the documents of all her landed properties for prayers, which she did.

According to Azeez, the victim gave him the documents of her landed properties at Omole, Oko-Oba and Ajah and he sold them at N75 million, N120 million and N180 million respectively.

When the police asked him about the whereabouts of the victims, he allegedly offered them bribe but the police assured him of their cooperation if he confessed to them.

The suspect allegedly admitted that he had killed the victims, adding that he killed the girl also because she knew all about the deal.

The death of the victims was discovered when the younger sister of the retired customs officer, Susan reported that her sister was missing to the police at Oko-Oba Division.

According to the police, when Susan paid a visit to her sister on 31 May, she discovered that the customs officer and her daughter had not returned home since 10 May when they went for a prayer session at Sango area of Ogun State, southwest Nigeria.

The police were told that the victim left home in her Toyota Camry car marked LND 554 A2 and during investigation, the car, through its tracking device, was traced to an uncompleted building in Alakuko area of Lagos.

When the police team from Oko-Oba and Alakuko divisions visited the building, two suspects, Ahmed Sholotan and Waliu Akiniyi were arrested in connection with the missing car.

P.M.NEWS learnt that the owner of the uncompleted building is living in the United States but asked Akiniyi to take care of the building.

When Akiniyi was arrested he told the police that Sholotan told him to keep the car for him until they find a buyer.

The police arrested Sholoton and he took them to Sango, where Azeez was arrested.

The matter has been transferred to the State Anti-Robbery Squad, SARS, Ikeja for further investigation.