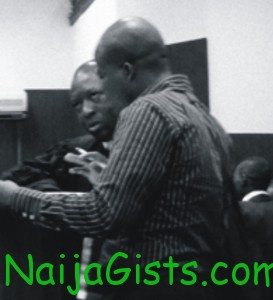 Despite all the campaigns and struggles towards actualizing gender equality in the country, it is disheartening to learn that someone who is expected to be well-informed on a very sensitive issue such as gender discrimination is found to be a protagonist of the act. naijagists.com

And it is no other person but Mr. Tajudeen Adenekan, a director at the Federal Ministry of Finance, who chased his wife of more than 10 years and his five daughters out of their house.

The man, who was initially an auditor in the ministry until months back when he was promoted to the post of assistant director, decided that it was important to have a male child and so he picked a quarrel with his wife. As if that was not enough, he approached an Igando customary court where he instituted a divorce case against the wife on allegation that she insulted his mother and threatened to kill him.

The court asked the husband to pay a paltry N100,000 to the wife, an amount obviously not enough for her to cater for the five children the union produced who are under her custody. The wife has alleged that the court was under the influence of the husband who is suspected to have paid for the judgment in the dissolution of the marriage.

The wife who is a tailor has since withdrawn their first child, Ruka from Command Secondary School she was formerly attending to a public school close to their home. According to her, the younger ones were also sent back from school when she could not afford to pay their fees as the N100,000 awarded her by the court was used to secure an accommodation for them to lay their heads.

When reached for his own side of the story, Mr. Adenekan confirmed that he had indeed divorced his wife on the basis the she threatened to kill him. He said the action became imperative since it was obvious the wife was hell-bent on taking his life and that when people started advising him to abandon his house for the wife, he thought it wiser to divorce her last year.

Asked about the welfare of his children, he informed us that the wife kidnapped them on their way to school. However, the wife, in response stressed that the eldest child still attended the command school for some time until the school fees were due and she could not afford the payment.

Sources who spoke with us said since he’s been living alone the man has suddenly become a regular customer at a popular joint around Igando, where he sometimes stays deep into the night. Others alleged he’s been seen a couple of times with some very young girls which they suspect may be students of one of the country’s many tertiary institutions.

The wife, who throughout her stay in Mr. Adenekan’s house had remained a full time housewife, said she was able to get an apartment somewhere around Ikotun axis of Lagos and was able to secure a job somewhere but in spite of this, she has been passing through hell fending for the five kids as no support is forthcoming from the estranged husband or any other quarter. (Global News)