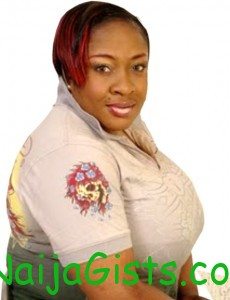 The apartment costs a whopping N250,000 a room per month.

Though she paid an initial N100,000, she could not raise the balance of N150,000 for the room and instead of going about her business in a quiet manner, we learnt she started telling all who cared to listen that she was the owner of the place without the consent of the person that allowed her to squat there. She would bring her friends and use the place as movie location, which didn’t go down well with her benefactor though he did not say anything all the while.

Aside this, she was alleged to be in the habit of disturbing the peace of other neighbours of the apartment which is located on Avocado Street in the dead of the night with loud prayers.

She would be dressed in her Celestial Church uniform popularly called sutana, spreading salt and other prayer materials common with the spiritual church members.

Those close to the neighborhood revealed to us that her prayer often sounded like she wanted to take over the house from the real occupier. Our sources further divulged that things didn’t go down well with the Good Samaritan (names withheld) who was advised by some people to ease out the stranger if he did not want to experience a downward slide in his life.

This we learnt prompted him to eject her from his house and she was said to have moved to another building on the same street because she wanted to stay in the expensive estate at all costs. However instead of keeping her distance from the house where she was ejected, she still stormed the place with her crew to shoot a movie, shouting and constituting nuisance in the area.

Her going back to the place, we learnt, must have stemmed from the fact that she had given an impression to many people that she was the owner of the apartment. Probably to hide her shame when contacted by her friends for the use of the apartment, she would have to take them there to prove it belonged to her.

Only God knows why most of these Nollywood stars choose to go this route to ridicule themselves.