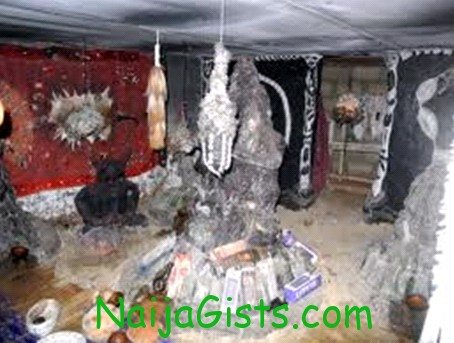 Olusola Oyekanmi a 50 year old man who hails from Ekiti state Nigeria is giving all glory to God for his miraculous escape from the hand of some ritualists. naijagists.com

The man who resides in Iju Station, Lagos State Nigeria works as a security guard. He is a member of Oodua Peoples Congress, OPC

On the fateful day, he boarded an 18-seater bus on Berger Bridge in Ojodu, Lagos enroute Ilesa-Ife and when the driver reached Ibadan, he claimed the vehicle had developed a fault and couldn’t continue on the journey.

He then called another driver to take them to their destination

Mr Olusola said another bus came within 10 minutes while some passengers stopped at Ibadan, Oyo State.

“Barely 10 minutes after the bus took off, virtually all the passengers went asleep only to be woken up at about 9 p.m. in a remote village in Ishan, Edo State,” said Olusola

Mr Olusola said all the vehicle passengers were later matched through a narrow gate into a very big room.

He said an elderly man, clad in red wrapper gave them water to drink inside a small baby skull.

Olusola said the woman in front of him had drunk the remaining water in the small baby skull and the old man went inside to get more water. He immediately followed the woman and didn’t drink the water.

“My avoidance of the water became my saving grace,” he added.

After they were matched into the room, a few minutes later, another man came in to take them one by one and when the man came for him he said: “Something is in your body.” He said the man immediately gave him a red cloth and ordered him to remove his cloths and wrap the red linen and he was taken inside another room; a dark one where he could see how the people were being slaughtered and their blood drained into a calabash before their bodies were dismembered and their parts put in coolers of different sizes.

“The man later came to take me from that room and put me in the booth of a car. I was driven out of the place and after some hours I was brought out to sit in the front.

Mr Olusola was later handed over to one of the ritualists as his conversation was centered around the activities of ritualists.

“The man told me that he was tired of this job that only pays him N350,000 for 10 goats (meaning human beings) and I replied by saying that I was also tired of the work and that I was looking for another job, just to create the impression that I was one of them.

“I could not get their names nor their phone numbers,” he said.

Olusola is very thankful to God for his miraculous escape.