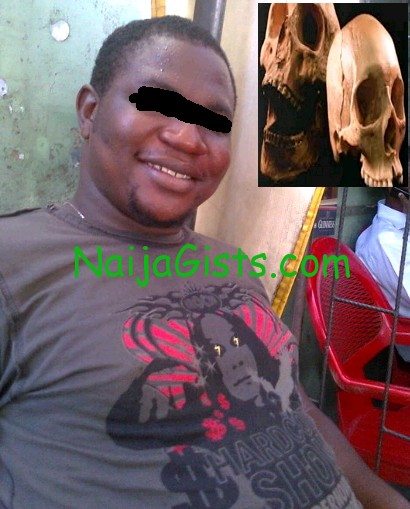 August 29, 2012 – Man Caught With Human Skull; Claims He Wants To Get Rich Quick

A 30 year old man, Matthew Akiode, who was arrested with a Pastor Michael Oyewole in Ogun State, Nigeria yesterday while exhuming a human skull at a cemetery in Sabo, Abeokuta has confessed that he needed it for a get rich quick ritual. naijagists.com

Matthew claims the bad economic situation in Nigeria pushed him to into such act.

He claimed the Pastor was rendering him spiritual assistance at the cemetery and he was the one who advised him to get the human skull for quick wealth ritual.

The pastor claims he is a genuine servant of God who is a healer at Irewole Cherubim and Seraphim Church at Adatan in Abeokuta, Ogun State.

30 year old Pastor Oyewole was arrested with Akiode at Sabo a few kilometers from Ona Ara Mimo C & S church in Olomore, Abeokuta where he pastors.

“The two suspects arrested are still with us. Investigation is ongoing. We are not leaving any stone unturned as we believe that more people might be involved in the crime,” Ogun State Police command spokesman, Muyiwa Adejobi explained.

An anonymous member of the Oyewole’s church said he wasn’t surprised at his arrest because members of the church had been very suspicious of the pastor’s moves lately.

“There are many fake men of God everywhere who rubbish the name of God with their devilish acts. That was why we have been watching Oyewole for some time,” he said.

Contrary to his claim that he heals people, a visit to Oyewole’s church revealed that he was a deserted man.

Area residents were afraid they could be arrested for interrogation when the police visit the church today for the ongoing investigation.