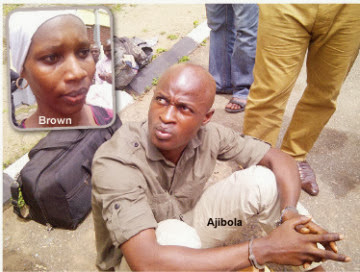 Ajibola Idowu, a 37-year-old man has been arrested in Lagos for kidnapping, Modupe Brown, his landlord’s daughter.

Ajibola held Modupe a 400 level LASU undergraduate bound for 3 years during which he impregnated her.

According to Punch Metro, after Brown had given birth to the child, Ajibola refused to allow the child access to immunisation. As a result, the child was said to have contracted polio disease and subsequently became crippled.

Lagos Deputy Police Public Relations Officer, Damasus Ozoani, told PUNCH Metro that Ajibola, was arrested along with his mother, Ebun, who allegedly conspired with him to commit the act.

He said, “Brown, a 400 level student of Business Administration at the Lagos State University, was kidnapped by Ajibola who kept her in captivity with his family for “three years between 2010 and 2013.

“On September 19, 2013, policemen from Area E Command, went to the Sagamu area of Ogun State to rescue the victim and also arrested the mother of the abductor, who watched over the victim. Ajibola was later arrested in the Idumota area of Lagos Island.

“Ajibola forcefully impregnated Brown while in captivity. She delivered a baby girl, who later became deformed as a result of Ajibola’s refusal to have the baby immunised against the Polio virus.”

While speaking with our correspondent, Brown described her ordeal in the hands of her abductor as a journey through the valley of the shadow of death. She said she was abducted at her father’s house in the Ebute Meta area of Lagos State.

She said, “I can’t even remember how he kidnapped me. All I know is that he held me captive for three years. It’s as if I was under a spell. Even when I was going to give birth, he did not allow me to go to a hospital. The baby was delivered at home and he was the one giving me medication.

“Even one day, when state officials came to the area to immunise children, he said he would not allow the child to be immunised, saying the drugs had been poisoned. Once, when I tried to leave, he threatened to kill me.”

PUNCH Metro learnt that during her time in captivity, the victim’s parents, who are retired civil servants, searched hospitals, mortuaries, police stations and churches for her all to no avail.

The victim’s father, Idowu Brown, said he had no clue that Ajibola was the abductor. He said, “I never knew it was Ajibola that kidnapped my daughter. He was my tenant for six years and greeted me every day. We even used to share jokes. He was aware that I had been looking “for my daughter for three years but he never said anything.

“When we could not find her, I reported the matter at FESTAC Police Division. It was in September this year that we heard from our daughter for the first time. She told us that she was in Sagamu and my wife went there.

“There we met Ajibola’s mother. That was how we found out that he (tenant) was the one behind the whole thing.”

The suspects however denied abducting the landlord’s daughter. Ajibola’s mother claimed her son and Brown were lovers, who decided to elope, maintaining that the case was not an abduction.

She said, “They were lovers. I never got involved in their matter until the child was born. I went to stay with them for about seven months to take care of the child, who was very ill. A few months after I left, they moved in with me at my three-bedroom house at Sagamu because they had been evicted.

“Ajibola was not staying with us because his business was in Lagos but I was with Brown “most of the time. Many times, I would ask her about her parents and when I could meet them but she kept on giving silly excuses until the day her mother came to my house with policemen.”

Ajibola, who is into satellite dish installation, said the plan to elope was hatched by Brown who paid N200, 000 into his bank account. The money was said to have been meant for her school project.

He said he could not understand why she would make such allegations against him.

“I did not kidnap her; we were lovers and decided to elope. Even when she was at my house, she used to make calls to her relatives telling them that she was alright,” Ajibola said.